Campus's BFG is a champion 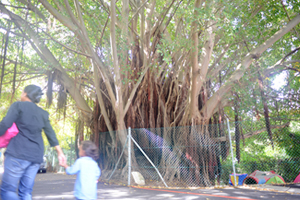 It's official. UCT's Big Friendly Giant is a champion.

The BFG is a century-old Moreton Bay fig - indigenous to the east coast of Australia - and now officially named in the Department of Agriculture, Forestry and Fisheries' (DAFF) Declared List of Champion Trees.

This granddaddy (Ficus macrophylla) shares the playground with UCT's Educare Centre, its handsome buttress roots a foothold for scores of children seeking magic, adventure and hideaways in its boughs and tangled strands.

Stretching 25m and with a stem circumference of 16m and a crown of 41m, the BFG is number 279 on the list. (And it has a 32m sibling at Arderne Gardens in Claremont, the largest tree in the Western Cape, and among the biggest in the country.)

UCT's giant is named among a long list of arboreal royals: The King of Ga-Ratjeke, a 23.5m baobab in Limpopo Province, one of five biggest indigenous trees in South Africa; the 61m Pinus taeda in the Western Cape's Buffelsnek State Forest, the country's largest pine tree; The North West Province's Marico Tree, the tallest thorn tree in the country; and the 79m Eucaplypus salinga, which lives in Limpopo's Woodbush Plantation, the country's tallest tree and planted in 1906 by forestry pioneer AK Eastwood.

DAFF manages this initiative, seeking out new candidates by virtue of their canopy size, width and historical value. Champion trees may not be cut or damaged without a licence.

It was UCT's online communications head and long-time tree lover, Rethea Deetlefs, who put the tree on the map.

After she alerted the Dendrological Society of South Africa it was shortlisted by the Champion Tree evaluation panel for further evaluation.

DAFF has called UCT's new champ The Kindergarten Giant. (That's TKG to you.)

"I'm very gratified that the tree is now officially on the list and will be protected," said Deetlefs. "UCT should be very proud of its Kindergarten Giant."

(For more information go to DAFF's page on champion trees.)