Price weighs in on ethics debate 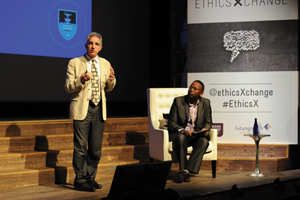 Can ethical behaviour be taught? Yes, says, Dr Max Price, UCT's Vice-Chancellor, but this is not necessarily the responsibility of universities.

Price was sharing insights and evidence at the recent EthicsXchange which was organised by asset management firm Futuregrowth and business academy ASISA.

But the answer was rather more complex than a "simple yes", argued Price. "Of course, the answer is yes if you think about ethics as these very simple guidelines or principles."

This, said Price, could be taught by parents, read in books and on the internet, and was not the sole responsibility of the university to teach.

"[Ethical issues] are context-specific, they are culture-specific and there are contradictory outcomes based on different codes and principles, so what we are really inclined to teach is moral reasoning. I would argue that this is an area where universities can play a role, because this is about not reading a code, but this is about learning new skills, about arguing, debating, positing something, rebutting it. "I would argue that every graduate of a university should be exposed to a course in moral ethics or moral reasoning so that when they graduate, they are better equipped for the world of work.

"But the real question is: can we teach ethical behaviour? Can we expect the knowledge of what is appropriate behaviour to translate into ethical action?

"The research results are conflicting. For example, there is research into medical doctors which shows that their confidence in dealing with ethical dilemmas and their ability to make appropriate decisions is indeed influenced by having been through ethical education. But in the field of business ethics, unfortunately, far less evidence. Levin concluded in the 1990s that ethics courses are 'useless and unable to help classes full of MBAs see that there is more to life than money, power and self-interest'."

Price referred to a number of other studies to conclude that "the empirical research, unfortunately, does not support the view that you can generally teach people to behave ethically".

"So what can universities do and what should we do?

"Universities have an unusual opportunity because we provide a sort of total-institution environment for our students almost 24/7 for about four years, and that means that students live in the university, and if we can role-model ethical behaviour in everything they see around them in the residences, in the lecture theatres, in exams, in the research that is done, we believe and hope that we can influence the values that they abide by and how they behave.

"Really, the university's most important role, I think, is to elevate an individual's sense that ideas matter, that thinking matters and that the process of reflection is important for the outcome of their moral decisions."

Noakes used examples from the medical science arena to argue that when "groupthink" – the Orwellian tendency to ostracise ideas that go against the popular grain – caused harm to patients that, say, received poor advice from their doctors, it could be said to be unethical. The discussion was chaired by Bongani Bingwa, a local television presenter and journalist.