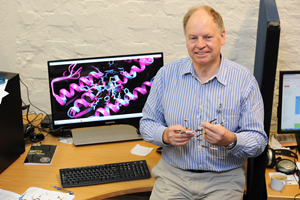 Innovation and adventure: Prof Trevor Sewell is a leader in the field of structural biology. "We can measure the forces required to unravel the individual domains of biological molecules," he said at his inaugural lecture.

It's unlikely that Professor Trevor Sewell has ever been introduced as an architect, but in tracing the work outlined in his recent inaugural lecture, A Journey into Inner Space: A view of biology from the atomic perspective, architecture is a neat way of describing his work conceptually.

In the early 20th century scientists discovered that X-rays could be used to 'see' the structure of matter, allowing them to understand molecules like proteins at atomic resolution. Thus began the era of protein crystallography.

Using a combination of X-ray crystallography, electron microscopy and molecular modelling, structural biologists like Sewell are privy to the elusive three-dimensional arrangement of atoms within molecules like proteins, the structures essential to understanding Nature's complex blueprints.

"These developments have brought biology into the domain of chemistry and physics, and enabled biotechnology - especially the rational design of medicines and industrial enzymes," said Sewell.

The products of this technology are pervasive: purifying gels to treat water; nitrilases that degrade the cyanide found in mine water, and which threaten the groundwater; drugs for heart disease, hypertension, and a host of others.

Widely used in the industry for the synthesis of drug intermediates, nitrilases are Sewell's speciality.

Head of UCT's Structural Biology Research Unit, Sewell has spent some 20 years developing the field of structural biology and has put it firmly on the map at UCT - and in South Africa.

"New developments in the field have shifted the goalposts," he said. "It is no longer acceptable to just visualise the structures we have to explain how they work. Indeed, many stellar contributions to the field have come forth in the last couple of years.

A driver of industrial and pharmaceutical development, the field attracts significant investment internationally in both the academic and industrial spheres.

Sewell's work with the electron microscope on imaging spectrin molecules in the human erythrocyte membrane led to a master's degree in 1976. He completed his PhD in protein crystallography under the supervision of Sir Tom Blundell, currently at Cambridge University and previously at Birkbeck College, London.

"The late 1970s were an extraordinarily fortunate time to study crystallography," he added. "Many modern methods were invented during this period and studying at the Department of Crystallography, Birkbeck College, made it possible to meet all the leading practitioners in the field at that time."

In 1992 Sewell was appointed director of UCT's Electron Microscope Unit, enabling him to introduce the latest techniques in 3D electron microscopy. He also secured the first modern cryo-electron microscopes in South Africa.

With substantial funding by the Carnegie Corporation of New York, he established a joint Master's Programme in Structural Biology with the University of the Western Cape. This marked the genesis of protein crystallography and established the field of structural biology in South Africa.

In their tributes Sewell's colleagues alluded to his vision, innovation ― and tenacity. Once Sewell painstakingly restored an old X-ray machine to be able to repeat experiments on X-ray diffraction by fibrous proteins (the kind found in porcupine quills) he'd seen in a book.

Being a scientist is not a 9 to 5 job, Sewell said in conclusion, paying homage to those who had supported his journey, particularly his family, who'd "put up with a crazy scientist".

(This year South Africa became a member of the European Synchrotron Radiation Facility, a joint research facility in Grenoble, France. The United Nations General Assembly proclaimed 2014 as the International Year of Crystallography, marking the centennial of the birth of X-ray crystallography.)