Dlamini-Zuma on pan-Africanism and the African Renaissance 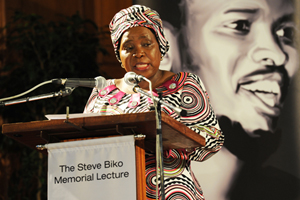 Not only does Africa have the potential to exorcise its post-colonial demons in fewer than a handful of generations; it could also debunk the myth of the 'hopeless continent' and bankroll its own development.

This was the argument of Dr Nkosazana Dlamini-Zuma, chairperson of the African Union Commission (AUC), delivering the 14th Steve Biko Memorial Lecture on 2 October. In her lecture, titled Pan-Africanism and the African Renaissance, the former South African national government minister outlined how - and why - pan-Africanism could be the means to the ultimate goal of a prosperous and united African society.

The pan-Africanist movement, said Dlamini-Zuma of the AU's 2013 theme, "saw Africans and their descendants in the diaspora unite against slavery, colonialism, racial oppression and apartheid", becoming "one of the most comprehensive, ambitious and enduring philosophies and praxes, developed and embraced by Africans and people of African descent".

"Reclaiming" African history was central to rejuvenating the fortunes of the continent, said Dlamini-Zuma. Failure to acknowledge and note this past would mean that "our story will forever be told by others".

"Decolonising our mind starts with our sense of self as Africans, a sense that is developed through our socialisation, in families, communities, schools, and - increasingly, in today's information age - in the media. We must therefore be more deliberate in the teaching and dissemination of African history, the mainstreaming of our indigenous knowledge systems, and the celebration of African culture."

Dlamini-Zuma reminded the audience of Africa's significant and oft-overlooked contribution to scientific progress. She also emphasised the need for any African renaissance to privilege the emancipation of African women from the "second-class position women occupied under different forms and expressions of patriarchy".

While the 'hopeless continent' narrative had not yet been entirely vanquished, Dlamini-Zuma is convinced that resource-rich Africa can not only prove doubters wrong, but even finance its own development, instead of relying on the 'begging bowl'.

There was no reason for this process to take eons, either.

"Thirty years ago, China was poorer than Malawi," Dlamini-Zuma pointed out, much to the approval of the Jameson Hall attendees.

There are already positive signs.

Foreign direct investment constitutes a greater proportion of the continent's GDP than previously, for instance.