Education at the heart of a thinking democracy 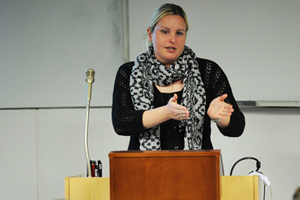 South Africans shouldn't be too complacent about democracy - or the big questions that still need to be addressed in society, maintains UCT's Dr George Hull.

High-quality education is imperative for a 'deliberative democracy', a form of government nurtured by robust public debate on issues of national importance, Hull added.

A lecturer in the Department of Philosophy, Hull was speaking at a David and Elaine Potter Foundation seminar which looked at how education acts as a forge for civil society. The TED-style seminar on 4 October was hosted by Dr Janique Peyper (clinical laboratory sciences) in fulfilment of her Potter Fellowship conditions.

Popular vote not a blanket vote

There is a danger, Hull said, that a popular vote tells one nothing - except that most people voted for one option rather than another.

Hull said that the model of deliberative democracy provided a solution, under certain conditions.

"It warns us not to fixate on the vote in isolation. As in other areas of life where we make use of majority voting, the vote ought to be a verdict on a deliberative process in which people have argued for certain views and discussed the merits, and demerits, of the options on the table.

"Where the institutions and other preconditions for robust and high-quality public debate before an election are in place, then the vote can be seen as everyone's provisional verdict on that debate about what would be best for the country."

One of the preconditions is high-quality education. "The ability to evaluate critically other people's arguments, and the ability to articulate one's own arguments are particularly fostered by humanities subjects - so that is a reason to be concerned about humanities slipping out of the picture in school education," Hull added.

Education has been an abiding interest for Peyper. A medical doctor who works in clinical laboratory sciences, her work in township and rural clinics as a young medical graduate fuelled her interest in the benefits of early childhood development.

Peyper said it was at this level that the greatest impact can be made, both in terms of cognitive development and in closing the gap between children from rich and poor environments.

Early childhood development interventions had proven to be a springboard for success in later life, said Peyper.