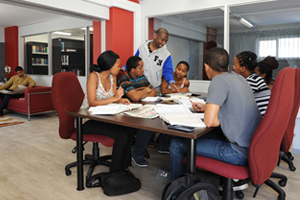 For students, by students: Forest Hill students can now get on with the business of studying in a space specifically created for that purpose.

For the first time Forest Hill residence's 750 students have a dedicated study area where they can congregate and concentrate on their academic endeavours.

The study room, which opened its doors on 28 September, is the culmination of a student-driven initiative to install a space specifically for studying. UCT Deputy Vice-Chancellor Professor Crain Soudien was on hand to cut the red ribbon and officially declare the study room and library open for use.

"There was a huge need for a place to study," explains Itumeleng Ledwaba, the former Forest Hill head student who spearheaded the initiative. "With only eight sub-wardens, it is very difficult to control noise levels in the (students') rooms. Thus the rooms are not very conducive to studying," he comments.

The study room comprises a library and two dedicated learning areas and occupies a space previously used as a recreational area that contained, among other things, pool tables and a television. The process to convert the space into a study area started with a petition to all residents requesting permission for the conversion. Once this was obtained, funding was secured '“ with most of the money coming from the house committee's kitty which is usually reserved for student functions and events.

"The best part (about this initiative) is that it is student-led and that the students sacrificed their house committee money to make it happen," says Associate Professor Edward Ojuka, who has been warden of Forest Hill for the last five years.

The study space has a designated discussion area to ensure that students who are studying are not disturbed. According to Ojuka, all library books '“ including textbooks and novels '“were donated by former residents. Students graduating this year will also be encouraged to donate their textbooks, Ojuka adds.

Ledwaba, who will be leaving Forest Hill after his graduation this year, says, "I consider this one of my biggest achievements. I'm so proud we pulled it together and that I was here to witness it all come together."