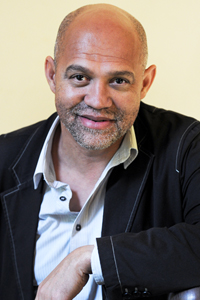 Russell Ally is on the run; the sandwich triangles and a Woolies salad are half-eaten, the remains of a working lunch.

Soon his lift will hoot outside to take him through teeming August rain to another rendezvous on campus.

Twenty-eight days into his first month, Ally is taking stock. "It's been a rollercoaster," says the new executive director of the Development and Alumni Department, the homely and benevolent-sounding DAD.

In addition to the legion of meetings, new faces, long titles, satellite campuses and reams of emails, it's tax season; and the many donors and corporates that provide unflagging support to UCT's academic enterprise are clamouring for tax certificates.

But the hardest part of adjusting to UCT lies in an idiosyncrasy. "Actually, it's the acronyms," he says, bemused by the plethora of unintelligible truncations for committees, units and entities that litter UCT speech and reports; baffling to the unversed.

"I try very hard not to use acronyms, difficult as I know this is."

And therein lies an important indicator of the inclusivity and the plain speak that characterise Ally's leadership style. But he'll talk about that later. First is the background of the UCT-trained historian (BA, 1979).

In his mid-50s, Ally is an all-rounder: historian, fundraiser, academic and former member of the Truth and Reconciliation Commission's Human Rights Violation Committee, chaired by Archbishop Emeritus Desmond Tutu.

After completing a master's at Rhodes University and a PhD at Cambridge, Ally started off as a high school history teacher in East London, later moving to senior history researcher at Wits, where he served on Senate and Council. He's published in leading journals and has authored a book on South Africa's mining industry.

Before his appointment to UCT, Ally spent five years as the Ford Foundation's programme officer for Southern Africa, overseeing their governance and civil society programme in South Africa, Namibia, Zimbabwe and Mozambique.

The new post at UCT melds his interests in academia and development. One of his main tasks is to look after and build relationships with 150 000 alumni, 90 000 in South Africa and the rest scattered through 100 countries abroad. And through fund-raising, he will advance UCT's goals of strengthening research, improving access to higher education and enhancing the quality of teaching and learning.

DAD's fundraising strategies must ensure that enough money comes it to fund these aspects of the university's mission when higher education funding streams are under threat.

"It's all about relationship-building with donors," says Ally.

And with his team; Ally manages a team of some 30 people and five alumni office representatives abroad in the US, UK, Canada, Australia and New Zealand.

He's brought good stock: a wealth of experience in grant-making. Prior to joining Ford, he was the country representative and executive director of the South African Office of the prominent Charles Stewart Mott Foundation in the US. Before this he was human rights project manager at the United Nations Office of the High Commissioner for Human Rights. And in 1988 he was the main author of South Africa's national Action Plan that was submitted to the UN in 1998 as part of the commemoration of the Universal Declaration of Human Rights' 50th anniversary.

And yes, the fund-raising environment is tough, but the money is still there, and funders are still looking for quality projects to spend it on.

"It's not so easy to give away money," says Ally. 'You have to look at the impact and the quality of the project; many boxes need to be ticked to ensure the money covers all the bases specified.

"Our challenge is, how do we get access to that money? How do you make a convincing and compelling argument for it?" Ally doesn't believe it approaching fund-raising from a "deficit perspective".

"We want to enter into partnerships with donors, with common objectives in mind." As a leader, Ally believes in being open and transparent, with an open-door policy. He believes in systems and structures and objectivity and impartiality.

But he likes to take people into his confidence.

"I'm not a great one for hierarchies. I know there are lines of accountability and responsibilities, but I don't believe in using those to treat people differently."

Outside there's a driver hooting.

Running is second nature, he says before departing. Off duty Ally is a passionate road runner, with nine Two Oceans and nine Comrades to his credit. But there's one last word before he goes:

Speed – and endurance – will stand him in good stead.