UCT scientists get the Swiss on their side 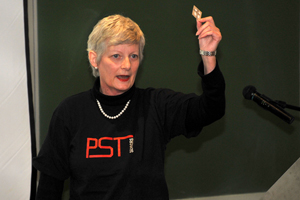 Show and tell: Associate Professor Margit Harting explained printed silicon technology, a novel method to print silicone semiconductors at room temperature on any material, including paper, which she and Professor David Britton developed.

A delegation of Swiss scientists discovered what some of UCT's top researchers were up to during a visit to campus early in September.

Led by Swiss Federal Councillor Johann Schneider-Ammann, the delegation toured some of the university's scientific facilities and was treated to presentations by a number of UCT academics that demonstrated cutting-edge innovation at the university.

Hosted by Professor Danie Visser, UCT's Deputy Vice-Chancellor for research, the visit cemented the growing partnership between UCT and their colleagues from universities in the mountainous European nation.

"In Switzerland, we co-operate with 20 institutions," said Professor Visser. "These figures reflect co-operations that have led to co-authored publications. There is a lot of emphasis in the health sciences, biology and physics. In each case, there is actual activity going on."

"Last year, [Professor Kelly Chibale] made a wonderful breakthrough, together with the Medicines for Malaria Venture, based in Geneva, when they discovered a compound that they are convinced and has been shown to have the potential to lead to a single-dose treatment of malaria," said Visser by way of example.

While pleased with the flourishing relationships with international partners, Visser reminded the delegation that, as UCT saw itself as an "excellent university in a developing country"; its role should largely be to use its expertise for the benefit of local communities.

"We should be part of solving the large problems in the world, but we should be also always looking at our own country and our own continent to see what we can do to benefit our communities," he said.

Schneider-Ammann was "very impressed" by the research presentations.

"We should strive - you for your country, and we for ours - to become even better at the end of the day for our societies and economies," he said, echoing Visser's sentiments. "All we are doing in science, in economics, in education, must contribute to offer opportunities to everybody, particularly to the young people, and by that I mean jobs. Being based on joint collaborations, we can become stronger and more innovative ... for the benefit of our societies."