Language switching: Not just a matter of mixing 'jou tale' 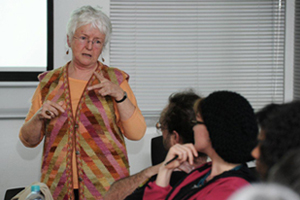 It's something that many South Africans might be familiar with, but Emeritus Professor Kay McCormick (pictured left) has shed new light on the finer points of language-mixing in oral and written communication.

McCormick was the keynote speaker at the second instalment of the Spring Seminar Series, which took place on 18 September. The seminar series is being held to celebrate 30 years since the Linguistics section of the School of African and Gender Studies, Anthropology and Linguistics (AXL) was established as a department.

Language mixing is essentially the use of two or more languages in a single communique, from a single sentence to an extended stanza.

"Is it conscious? Sometimes, yes. Sometimes it is absolutely not conscious," McCormick said. "Does it occur only in spoken languages? No."

McCormick played recordings of conversations she held with pre-school children in Chapel Street, District Six, in the 1980s, pointing out how the youngsters wove English and Afrikaans together seamlessly.

Such language switching that occurs naturally, in spoken and written communication, shows that both the language and the speakers are flexible, fluid and that the speakers are able to mentally reconcile both, said McCormick.

Language as a marker of social identity was also key to informing when and who spoke, and in which way.

From the switch between pre-meeting chatter and speaking to a peer, to addressing a figure of perceived authority, McCormick explained that the more formal the setting, the less likely people were to speak in a "mixed vernacular".

"In the apartheid era 'standard' Afrikaans was hated by many people who were oppressed because it was the language they associated with apartheid rules and their oppression. With English, on the other hand, you'd have this notion of upward mobility and so forth."

McCormick used South Africa's national anthem as a prime example of language switching under the new dispensation. The Afrikaans stanza is in effect the adjectival clause for the English stanza, she points out, with the Afrikaans section setting the scene from whence the "call to come together" that "sounds".

Language switching was so frowned upon under apartheid, that the South African Broadcasting Corporation of the day banned it from its airwaves. "The SABC [during the apartheid era] was notoriously purist about language mixing, and their policy explicitly forbade mixing. If you had a word that you couldn't say in Afrikaans, you were not to borrow from English. You were to use the morphological stock that existed and make a word," said McCormick.

Language switching is not limited to flits between English and Afrikaans, either.

Photographs of Indian cities showed advertising boards and shop menus that were cornucopias of English-Hindi mixing, with the languages synthesising to the point of some English words being written in Hindi script.

Three more 'Spring' seminars are due to take place in October in the HUMA Seminar Room, 4th Floor Humanities Grad School Building. On October 2, Rajend Mesthrie and Ana Deumert look at The Social Life of Language, and on October 9, Jon Orman, Kate McLachlan, Sean Bowerman discuss Theories of Language and Language Use. The final instalment in the series sees Ana Deumert, Ellen Hurst tackle Language and Creativity on October 16