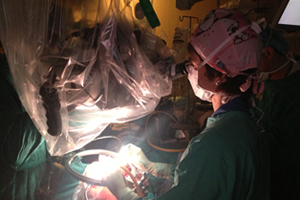 Colour map: The new brain tumour operating technique relies on a drug called 5-ALA, administered just before surgery. This is preferentially taken up by the tumour, which literally lights up under the operating microscope, helping neurosurgeons like UCT's Dr Sally Röthemeyer locate diseased tissue.

A patient at Groote Schuur Hospital has become the first in the Western Cape to undergo surgery for a brain tumour using intra-operative fluorescence, a new technique that lights up the affected area of the brain.

Pioneering neurosurgeon Dr Sally Röthemeyer of UCT's Division of Neurosurgery conducted the six-hour operation on a 52-year old patient who was later discharged. He is due to return to the hospital soon to commence radiotherapy under Dr Jeanette Parkes of UCT's Division of Radiation Oncology.

Malignant brain tumours are one of the greatest challenges in modern medicine and limited progress has been made in the field over the past decades. Although tumours like germinomas and medulloblastomas can be cured with aggressive treatment, this is not the case for gliomas, the commonest form of brain tumour.

Treatment usually entails surgical resection followed by radiotherapy and chemotherapy and while surgery alone is never curative, the extent of removal plays an important role in determining duration - and quality - of survival.

The greatest challenge in removing such tumours is to protect and preserve normal brain function. This is particularly difficult when neurosurgeons aren't able to distinguish between normal brain and tumour-infiltrated brain.

But the new technique gives the neurosurgeon a colour-coded map to help locate the tumour.

The technique uses a drug called 5-ALA, which has only recently become available in South Africa. This is administered just before surgery and is preferentially taken up by the tumour, which literally lights up under the operating microscope.

Röthemeyer was instructed in the use of this technique by Professor Walter Stummer, chairperson of neurosurgery at Muenster in Germany.

Head of UCT's Division of Neurosurgery Professor Graham Fieggen has hailed this as a major breakthrough in the care offered to South African patients with malignant brain tumours and paid tribute to Röthemeyer's skill in successfully tackling such challenging cases.

'These tumours are known as glioblastoma multiforme as they come in various shapes and sizes, are often highly invasive and terribly vascular, making surgery extremely demanding.'

Fieggen was first convinced of the value of this approach in 1998 while a visiting fellow in epilepsy surgery in Munich where Stummer pioneered the technique.

Röthemeyer is no stranger to innovation. She recently became the first neurosurgeon in the public sector to implant a motor cortex stimulator for intractable pain. She has risen through the ranks to head one of the neurosurgical firms at Groote Schuur. Her chief interests are brain tumour surgery and functional neurosurgery, especially the management of epilepsy and pain. She intends to continue her innovative ways in developing the first deep brain stimulation programme in the public sector.

Development like these have been paralleled by progress in radiotherapy at Groote Schuur.

Under the guidance of Professor Raymond Abbratt, head of the UCT's Department of Radiation Medicine, a recently installed radiotherapy machine and planning system at Groote Schuur Hospital have facilitated state-of-the-art treatment planning and the introduction of new techniques.

These have resulted in far more accurate tumour treatment, minimising radiation to surrounding normal brain tissue. Hester Burger, head of medical physics, and Parkes were trained in these techniques in Berlin, Germany, earlier this year and started to introduce them into clinical practice at Groote Schuur.