Run of awards for conservation biologist 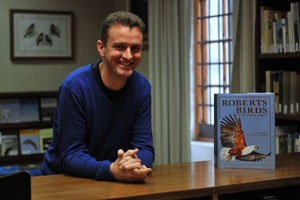 His most recent honour is the South African Association for the Advancement of Science (S2A3) British Association Medal (silver) for 2013.

For the past 81 years it's been one of the highest awards made to young Southern African scientists for original research, and recognises outstanding capability and achievements in publications, discoveries or special skills.

This celebrated his individual contributions to science, through research, over a five- to 10-year period.

'It's nice to have the recognition that what we're doing is important - and it's nice to give the work we do some publicity and prominence,' he said.

'It's also good for the students I work with to know that their field is recognised at the highest levels.'

Although based in the Percy FitzPatrick Institute of African Ornithology (biological sciences department), birds are only one focus of his broad range of research interests, which span landscape ecology, conservation biology, community ecology, resilience and complex systems theory.

He's running two big programmes, one of which is on water birds and disease, particularly avian influenza and avian malaria (birds are not vectors for human malaria) and potential vectors of human and avian influenza.

But much of his focus is on ducks as primary vectors of avian influenza. Using telemetry, ducks like Red-billed Teal and Egyptian Geese (which is actually a shelduck, a cross between a goose and a duck) are tagged to document their range and movements.

A GPS unit inside a small tracked a Teflon backpack is strapped onto the duck, collecting precise position points along the bird's route.

Egyptian Geese are the most widespread of all the African waterfowl and are high risk vectors for avian influenza.

'They're abundant, live among people and move long distances and come into contact with people and their poultry. And avian influenza is waterborne.'

'We don't know how much of South Africa is protected; and we don't know what private areas like game parks are contributing to conservation. We think they're using the same conservation model but are they long-term solutions?'