Criminal events from the past can inspire creativity 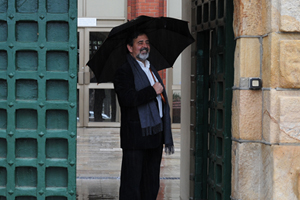 Historic detective: Professor Nigel Penn believes the details of the cultural context within which individuals in the Cape Colony operated can be found in the criminal records of the time.

History can be as creative and imaginative as literature.

UCT Professor Nigel Penn came to this realisation upon "resurrecting" an historic figure "who had lain dormant in documents". The character was Estienne Barbier, a French soldier in the service of the VOC (the Dutch East Indian Company), who led a rebellion against his employer in 1738. Barbier would later become the central character in a novel by Andre P. Brink titled On the contrary.

These facts, interwoven with many others about the Cape Colony, formed part of Penn's inaugural lecture, titled History from Crime: Criminal records, Microhistory and early Cape society, which he delivered on 11 September.

Pointing out that "crime records are tainted", Penn revealed that it was not so much the crime as "the social and cultural world in which or against which the crime was committed" that historians like himself were interested in.

His focus on microhistory, which "narrates events" in microscopic detail, has allowed him to lift from obscurity interesting characters like Barbier as well as glean invaluable knowledge of "cultural details" of the time. From his research into the rape case of a Khoi woman in 1727 Penn for instance learnt that "aggressive drink rituals were part of low European culture (in the Cape Colony); that Crebis was a Khoikhoi woman's name and that there were still Khoikhoi speakers in the Tygerberg area in 1727".

Penn's attempts to understand the culture of the early Cape through its criminal records has led him to conclude that microhistory is "a hazardous enterprise" but one that would be impossible without the criminal records.

Penn obtained his PhD at UCT in 1995. His doctoral study titled The Northern Cape Frontier Zone, 1700-1815 dealt with the impact of colonial expansion on the indigenous people of the Cape (the Khoisan) and discussed the evolution and character of the various frontier societies of the Cape interior. This work was later revised as a book and published in 2005 as The Forgotten Frontier. The Forgotten Frontier won an American Library Association Choice Award for academic book of the year and won Penn the UCT Book Award for the third time.