Sold on the river 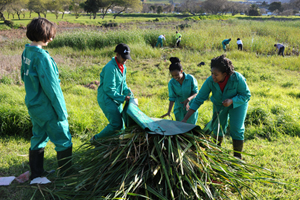 UCT's Green Campus Initiative and Friends of the Liesbeeck rolled up their sleeves in mercifully good weather on Friday 23 August to clear a section of the wetland along the Liesbeeck River in Mowbray, now choked by encroaching Common Reed (Phragmites australis).

The Liesbeeck was originally called the Amstel by Jan van Riebeeck and in 1657 the first free burghers of the Dutch East India Company were granted land to farm along its banks.

With its headwaters above Kirstenbosch, the Liesbeeck meanders some nine kilometres through the country's oldest "urbanised river valley" to a confluence with the Black River in Observatory, emptying into Table Bay at Paarden Island. It's also home to the Platanna, or African clawed frog.

But large areas of the neighbouring wetland in Mowbray are clogged by Common Reed.

"We don't really know if Phragmites is indigenous or not as it's been around for as long as we can remember and it's fairly widely distributed around the world," said Friends of the Liesbeeck project manager Nick Fordyce.

A postgraduate student in the Faculty of Law, Fordyce is about to submit his dissertation for an MPhil in Environmental Law.

"Nonetheless, in the wrong conditions Phragmites is definitely invasive. It grows rapidly in high-nutrient conditions and when water levels drop. The Valkenberg wetland is currently very full with water, but over the next few weeks the water levels will drop and we anticipate that the reeds will grow rapidly."

As the wetland has very high nutrient levels, the Phragmites poses a big challenge.

"Our vision is to create a patchwork of habitat within the wetland, which will mean there are areas of open water, dense reeds and patches of less-dense reeds. With this in mind the work we did on Friday was extremely helpful and strategic." 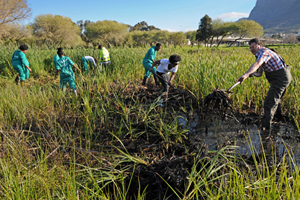 In the thick: Dr Kevin Winter of the Environmental and Geographical Science and member of the Friends of the Liesbeeck committee works with Green Campus Initiative members and students to remove invasive Common Reed from the Liesbeeck River wetlands.

Fordyce adds that's it's only in the past year or so that the Valkenberg wetland has been reconnected to the wetland.

"Before that the wetland was isolated and completely covered with Common Reed."

He says that the City of Cape Town, in conjunction with Friends of the Liesbeeck, opened up a passage for flood waters from the river to flow into the wetland. Much common reed was also removed.

"Since then a huge diversity of species (particularly birds) has moved in, including great white pelicans, numerous heron and egret species, three species of duck and a number of other wetland species, including Cape Grey Mongoose and Cape Clawless Otter," adds Fordyce.

In addition, the River Club (north of the wetland), which has been flooded during winter for a number of seasons, has escaped the annual deluge, thanks to the link between the river and the wetland, which Fordyce says has acted as a sponge and absorbed much of the flood water.

"Regarding the patchwork of habitat within the wetland, we have observed that a number of species, particularly birds, forage in the open water and will seek refuge in the reed beds, hence our efforts to maintain a diverse variety of habitat within it," says Fordyce.

(The Green Campus Initiative (GCI) was started in 2007 by students and staff volunteers to promote environmental sustainability at UCT.)