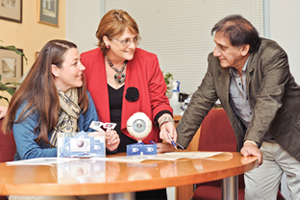 In 2010, nine-year-old Corey Haas underwent genetic therapy in the US, regaining much of the sight he had lost to a rare degenerative eye condition, Leber Congential Amaurosis (LCA). It marked a milestone in genetic therapy and caused a flurry in the scientific community. The media dubbed it a story of "passion and perseverance".

In the past two decades since the team began its research, they have found little evidence in SA of the retinal genetic defects prevalent in the US and UK, indicating a novel gene pool for this group of disorders.

In the RDD programme's 23 years, the team has notched up several advances on this front. Supported by Retina SA, UCT and the Medical Research Council, they've mapped two retinal genes, RP17 (CAIV) and RP13 (PRPF8), unique to SA.

They now have the task of characterising over 3 115 individuals from 1 344 SA families registered on the unit's RDD database, and archiving the DNA. (Only 19% of families in the UCT database have been identified as having disease-causing mutations).

Identifying and managing the specific genetic mutation in every one of these individuals in SA will build a foundation for managing patients and alerting them to future treatment options.

The team has also capitalised on developments in DNA sequencing technology, particularly the development of the microarray chip, described as 'a lab-on-a-chip'. They work with the Asper Ophthalmics mutation-screening programme in Estonia. Patients' DNA samples are sent for testing on the Asper Microarray Chips, which contain all the known mutations and variations in a range of RDDs worldwide.

Identifying genetic mutations and translating diagnostic results are important steps in linking patients to clinical trials, adds Greenberg. They work with a multi-disciplinary clinical team of genetic counsellors, genetic nursing sisters and medical scientists at Groote Schuur and Tygerberg Hospitals. The time factor can be a deterrent. An advocate from the north had her DNA isolated and banked in 2002, but only received results in 2008. It was good news, however, as clinical trials had begun in the US for gene therapy to treat her specific mutation.

Things moved more quickly for a family north of our borders with two young daughters, whose DNA was sent for gene tracking in 2012. The team found the specific mutation after sending DNA to Estonia for screening and the results came in at the same time as a clinical trial began in the UK.

The good news was delivered telephonically by genetic counsellor Mardelle Schoeman, who works at Tygerberg Hospital. Greenberg subsequently sent a detailed report to the family's doctor (with their permission), which is one way that the team is overcoming logistics and capacity challenges when patients are located far away.

Another young family is going all the way to get their seven-year-old daughter with LCA and mutations in the RPE65 gene onto a clinical trial. There is no family history of the condition, and her parents used the UCT team's contacts in the UK (where 105 RDD-related genes were tested) to have their daughter's genetic mutation pinpointed.

"It took a while before we received results but we were overwhelmed when we did, as they had identified her genetic mutation," said her mother.

"This is also an opportunity to assist SA citizens with similar genetic disorders, as we understand that we could possibly be the first family from SA on the trial in the UK. We do not expect this journey to be easy and we'll take one step at a time." Greenberg is upbeat about the future.

"As genetic testing becomes part of standard practice and complements ophthalmic evaluation, management and care, it will benefit patients with RDDs when trials are planned and conducted in the future."