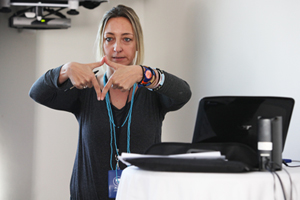 Performing toughness online: Frieda Coetzee of UCT argued that adolescent Capetonian users of the instant messaging platform MXit - particularly those living in areas with a powerful gang presence - often 'stagemanage' their online identities to correspond with "locally meaningful" ideas of power and toughness through nicknames, slogans, colours, emblems and lexical items. This occurs regardless of whether these online identities are 'authentic' or not.

Freestyle rapping, South African tsotsitaal and how language - both wittingly and unwittingly - speaks to one's socio-economic status were just some of the topics explored at a recent pioneering conference convened by UCT.

Thirty-five academics from 25 different institutions on three continents (Africa, Europe and North America) gathered to discuss some of the latest research in a growing field of interest at the African Urban and Youth Language Conference 2013. "Internationally, there has been a recent increase in interest in youth and urban language phenomena," says UCT's Dr Ellen Hurst, the conference's principal organiser. "Youth and urban languages are seen to be at the heart of language change in postmodern societies, and a feature of contemporary diversity in our cities."

Hurst, who lectures in UCT's Humanities Education Development Unit, suggested that Capetonian youths' use of tsotsitaal was often organised along gender lines and continued to be used as an 'anti-language', on the fringes of socially 'acceptable' tongues.

Hurst's research, which explored language use among two self-identifying communities in Cape Town townships (young men and young lesbian women), suggested - among other things - that lesbian speakers use tsotsitaal lexical items as part of their gender performance, but do not create them; that gender performances in peer groups are supported by the choice of lexical items; and that the identities being constructed in the female peer group, while 'streetwise', lean towards 'correct' or standard language.

A host of other topics were explored, many speaking to subculture language groups among urban youth and the relationship between language use and socio-economic contexts.

From the slums of Addis Ababa comes a unique dialect used by impoverished local youth and frowned upon by some members of the upper crust of Ethiopian society. After spending time in the company of young slum-dwellers, or 'Arada' ('the smart'), Mehari Worku of Addis Ababa University studied this tongue, exposing its roots in languages such as Amharic - Ethiopia's official language - and Arabic. This argot, jealously guarded by its speakers, was developed largely to help these young people identify themselves as separate from a society that "distrusts them and that the Arada, in turn, mistrust", says Worku.

While this way of speaking is not considered a language on its own - the negative connotations are such that young people are sometimes reprimanded for using it - the Arada youths' tongue has already contributed expressions and words to the standard Amharic dictionary. The conference also featured a keynote address by Dr Peter Githinji of Ohio University and Dr H. Samy Alim of Stanford University, both speaking to the theme of marginalised languages used by urban youth.

Githinji explored a tongue used by young Kenyans that some see as a threat to 'mainstream' Kenyan culture. He suggested instead that Sheng, the urban vernacular currently in the 'dock', is not a threat at all. In fact, other languages could learn from Sheng's adaptive strategies in order to remain relevant in a "competitive linguistic market", said Githinji.

Alim continued the focus on urban subcultures which are sometimes looked down on by various sectors of society. Having studied myriad freestyle rap battles in Los Angeles, USA, Alim considered how understandings of 'blackness' and other social understandings were produced by MCs and audiences in these spaces. Alim demonstrated how performers attach new social meanings to race and ethnicity in verbal duels, and also showed how normative ideas of blackness were created and sometimes challenged by non-black MCs and audience members.

The conference was held at the Lady Hamilton Hotel in Cape Town, and was the first of its kind to focus on this particular range of topics.