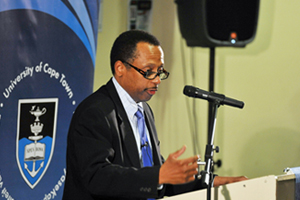 Where to from here? Dr Earl Lewis from the USA says it is not enough to say that 'demography' will take care of it all.

Was desegregation of American schools in the twentieth century the solution to racism that many thought it would be? Relating how a (white) schoolteacher regaled him and his classmates with tales of "the good old days" on cotton plantations, Dr Earl Lewis says he wasn't convinced.

Lewis, speaking at UCT's VC's Open Lecture last month, argued that affirmative-action policies should continue to be a legal variable for higher education institutions to consider in the admissions process. Lewis is the president of the Andrew W. Mellon Foundation (which has backed more than 600 UCT researchers to date) and previously held high-level academic posts at a number of US universities.

Lewis's lecture, titled The Ever-Changing Contours of the Affirmative Action Debate in the United States, painted a picture of the debate using the backdrop of the Abigail Fisher case in the US. The 23-year old Fisher is suing the University of Texas for rejecting her 2008 application to study there, alleging that it was on the grounds that she was white.

If the Fisher case – which was recently sent from the US Supreme Court to a lower court – "goes the way many of us believe it will", it would be "almost impossible" for higher education institutions (HEIs) to continue to use race as an admissions criterion, says Lewis. In 2003, the US Supreme Court ruled that higher education institutions in the US could use race as one of many variables to assess potential students.

The history of race in the US
The affirmative-action debate started out as a response to years of race-based segregation in the United States, explained Lewis. "After two-and-a-half centuries of slavery and another century of segregation, the policy remains anything but settled," he observed, adding that the policy, which first emerged in an 'analogue' world, had not kept pace with the flow of information in the 'digital' era. The question remains: "How do we put structures in place to ensure that we can tap the greatest talent – in the most diverse sense – of the nation?"

When state laws declaring separate public schools for black and white students were declared unconstitutional in the Brown v. Board of Education case of 1954, many hoped it would signal the beginning of a truly integrated and diverse US society. But "it was not just enough to have people sitting next to each other; you actually had to develop programmes that required individuals to think in different ways, to interrogate the ideas they held deeply", maintained Lewis.

Indeed, many urban districts were more segregated now than they were in the 1950s, he said. While the Brown phase, from 1954 until 1971, was one of the longest in American social history, the "race-conscious affirmative-action" chapter (1971-78) was one of the shortest, he continued.

Equity and equality
The one-tenth of one percent of difference in the human genome that gave rise to the classification of 'races' had a disproportionate effect on human history, argued Lewis. Race-based subjugation in the US was not just a matter of physical segregation, but also of the unequal distribution of resources.

"Equity is the process by which we become equal," Lewis contended. Paraphrasing the late American civil rights leader Benjamin Hooks, Lewis likened some Americans' confusion about the difference between equality and equity to an outside view of the starting grid for a 400-metre track race: the staggered start-grid appears unequal, but simply ensures that those on the inside lanes have no unfair advantage.

"In some ways you begin to recognise that there are structures and forms to every race that's run. You create those standard opportunities to make sure that you're not only achieving equality, but that there's equity in the process."

Social policies needed
Lewis also rubbished notions that "demography would take care of it all", with global population trends seeming to point in a particular direction.

"If the goal of education is to create not only the opportunity for encounter in a classroom but a learning environment that enhances the likelihood that individuals will be active members of their communities and seek to raise the important questions that make the key discoveries, then we realise that, in some ways, it's just not enough to say that demography will take care of it all.

"We have to have social policies in place that continue to raise the spectre that intentional human action requires structured opportunities for engagement. In this period between now and 2050, the debate will continue to rage in the United States over what should be an effective affirmative action policy."

He says that no matter how one thinks about the next chapter in American history in the context of the affirmative-action debate, the ways in which the US shapes that conversation will have implications for the rest of the world.

In conclusion, he said, "It's important, as you sit here in South Africa, that you not only pay attention to the questions that are posed, but that you offer your own answers; because, as we look ahead in the twenty-first century, it's a global community that will ultimately help shape the US definition, more so in the next 15 to 20 years than it has ever been understood in my country."