The long fingers of inequality

Land issues in SA a hundred years on 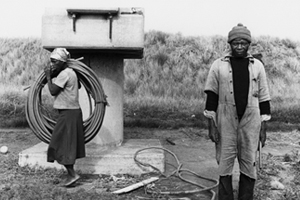 Farming in Merebank, a suburb of Durban KwaZulu-Natal, circa 1980s.

Rural South Africans are still among the most oppressed in South Africa, with little hope of relief in the foreseeable future. This seems to be the consensus among top researchers, as land issues fall under the spotlight a hundred years on from the legislative milestone of 1913, when the notorious Natives Land Act was passed.

The act dispossessed black people of their land and restricted them to 7% of South African land, even though they made up 70% of the population. In 1936 the percentage was increased to 13%; it would remain there until 1994. But, says UCT's Professor Lungisile Ntsebeza, despite the advent of democracy, rural South Africans remain disenfranchised, in terms of both land ownership and governance. Ntsebeza, the NRF Chair in Land Reform and Democracy in South Africa, criticises the current government for not doing enough to free South Africans from the legacy of the Natives Land Act. He regards the policies and laws dealing with land issues as being "shockingly" inadequate. He argues that instead of bringing about the dismantling of what he calls "tribal authority", the current government is merely entrenching it. Tribal authority (now referred to as 'traditional leaders' exercised "enormous power" during apartheid in that they could decide who in the former homelands could occupy land and who could not. The land rights in the former homelands were held by the state.

Statistics suggest that the current government's 'willing buyer, willing seller' policy to ensure the transfer of land from white to black ownership has reaped little reward. Only a small percentage (less than 10%) of agricultural land has ended up in black hands, and a mere 49% of the land reform projects are sustainable, according to a report by the National Treasury.

For Paul Weinberg, senior curator of UCT's visual arts archive, representation of land in the visual arts has masked the ongoing tensions around race and land ownership. Specifically regarding nineteenth-century imagery, Weinberg says that photographers offered "an idealised, romantic view of South Africa" where indigenous people are portrayed as "benign curiosities" and which confirmed European "claims to the continent, region and country".

And like Ntsebeza, Ramphele feels that the legacy of the Land Act will continue unless tribal authorities are stripped of their power. For researcher Margareet Visser, from UCT's Labour and Enterprises Policy Research Project (LEP), lack of access to land should not be viewed in isolation from other points of tension in rural areas.

Lack of access to land was not what motivated farm workers in the Western Cape to strike last year, she points out. They wanted a higher wage. She says that these strikes – which she researched in great depth for a project she was working on – show that land ownership alone does not account for the growing dissatisfaction among rural South Africans. 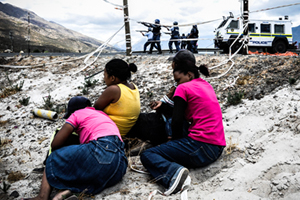 Visser points out that as difficult as the situation is for black rural dwellers, their white counterparts who still own large tracts of land face their own set of difficulties.

"The hard reality is that many commercial farmers in South Africa operate on an overdraft facility. While farm workers find themselves at the lowest end of the (value) chain – and hence are the worst off – farmers are in a relatively weak position themselves." Research by the LEP found that farmers (who do not pack their own fruit) receive only 18% of the final retail price for a carton of table grapes, while supermarkets get 42%.

Also, she explains, the South African government does not adequately subsidise commercial farmers compared to the rest of the world. "The level of state subsidisation of total farm income in South Africa is 5%, on a par with Australia, as opposed to 68% in Switzerland, 58% in Japan, 33% in the EU and 16% in the USA."

These various perspectives illustrate the deep complexity of land issues and ownership in the post-apartheid South African state, and one is left wondering if it is a case of 'the more things change, the more they stay the same'.