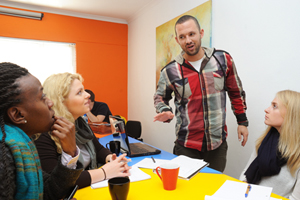 Business connection: Athlone resident Gary Saaiman hopes his contact with students from the UCT-LSE July School will result in a sustainable business model for his idea to use technology to improve services in Bridgetown, the area in which he lives, and elsewhere.

A course offered at the LSE-UCT July School saw students giving business advice to a group of community members which included reformed gangsters and former drug addicts. And, it turns out, these are the very people they were told to avoid at all costs at the start of their programme.

The irony of the situation was not lost on Professor Harry Barkema, from the London School of Economics and Political Science (LSE), who presents the course. Barkema related that at the beginning of the course, entitled Business Model Innovation at the Base of the Pyramid: Cape Town and beyond, the students, many of whom were in Cape Town for the first time, were given safety tips, "not knowing that a week later some of them would sit across from the very people they were warned against," he says.

The July school saw UCT and LSE partnering for the first time to offer a range of short, university-level courses running over two weeks. The field trip to the RLabs (Reconstructed Living Labs), a community centre in Bridgetown, Athlone, gave the students the chance to apply what they are learning to real-life situations. They were tasked with coming up with business models for five social enterprises that are being developed at the RLabs, where digital and social media are used to link people to help solve problems, transfer skills and teach entrepreneurship. According to Barkema and his UCT counterpart Dr FranÃ§ois Bonnici, the people who are being advised by the students are looking for ways to use technology to address specific challenges in their communities. One of these projects hopes to provide an online platform upon which bargain-hunting consumers can load details of the location of good deals in their area.

"Thus, instead of retailers informing people of their specials, consumers take back some of the power, and communicate to the communities in which they live where the best deals can be found," says Bonnici.

One of the social entrepreneurs, Bridgetown resident Gary Saaiman, says the students bring a fresh perspective to his endeavour. "They are exposing me to things I haven't considered before. The process helps me see different angles."

Darius Meadon, an ad agency strategist taking part in the course, believes the interaction is a good combination of different skill sets. "The community entrepreneur brings community knowledge and passion, and we bring the skills to commercialise her project."

Ehae Longe, a law student from Nigeria, says the course has opened her eyes to how poverty is different in different contexts. "This means there is no one solution to the problem. Solutions must be tailor-made to suit the different instances of poverty," she adds.

The next phase in the project will see the students presenting their business models at the RLabs – not only to each other and their lecturers, but to the Bridgetown community in Athlone, too.