Cheetahs are fast, but springbok are faster over the long haul. Why? What causes muscle fatigue in the hunter, while the hunted keeps going? And how can high-performance athletes beneﬁt from the research? 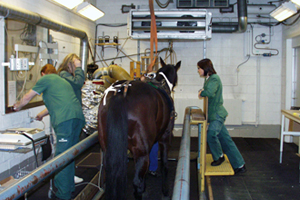 Horse power: When Dr Tertius Kohn first saw a horse on a treadmill in Uppsala, Sweden, his mind opened up to the possibility of muscle research on wild animals. The muscle biopsy site on the horse pictured here is visible on the left buttock, while the cannula inserted into the neck draws blood for lactates research.

"Ever seen a horse on a treadmill?" asks Dr Tertius Kohn in the laboratory he's established for advanced study of single skeletal muscle fibre physiology and function. Negative.

"Camels?" he adds encouragingly. "There's also lots of money in racing camels." Not much is known about mammalian skeletal muscle. Of the roughly 5 000 mammal species documented, only nine species, mostly domesticated, have been studied at this level.

Far less is known about muscle physiology in wild animals - at the pinnacle of athletic performance, thanks to muscles uniquely adapted for survival over eons.

All this is a new focus area for the UCT/MRC Research Unit for Exercise Science and Sports Medicine (ESSM), where Kohn is a senior research associate.

Kohn began a masters (later upgrading to a PhD) under former Springbok gymnast Professor Kathy Myburgh at Stellenbosch. They tackled a question many were asking: why did East African runners dominate endurance running? "We didn't know if it was nature or nurture that separated black runners from whites," said Kohn.

What they found was astonishing. South African black runners had more fast-twitch muscle fibres, but less lactic acid in the blood. This went against what was being taught in exercise physiology and biochemistry.

Setting genetics aside, Kohn speculated that East African runners were merely training harder. He then trained a mixed cohort of runners. Their muscle and lactate profiles started mimicking those of the East African runners. And they became faster. Is it merely a question of training, then?
"I don't know," he says. "It's too early to tell."
But he's planning to find out.
Kohn's interest in muscle performance was piqued when he first saw a horse on a treadmill at a university in Uppsala, Sweden. The thought then crossed his mind: why stop at horses?

It was after meeting ESSM's trailblazing director and co-founder Professor Tim Noakes that Kohn was recruited to UCT in 2007 as a postdoctoral research fellow. He soon realised that his toolbox of muscle techniques didn't equip him to understand contraction in single muscle fibres.

" I needed something to measure their performance," he explains. To do this, he set up the ESSM muscle laboratory - and then realised that wild animals, not humans, were at the pinnacle of athletic performance. But there was no research on wild animals. "I wanted to know what enables a kudu to leap over three-metre-high fences, and why a springbok can outrun a cheetah at almost 100 km/h. And why the lion is king of the jungle."

Using antelope and lion muscle, Kohn started a new chapter at ESSM. He was particularly interested in muscle fibre type, determining the slow-twitch (endurance) and fast-twitch (speed) fibre proportions in these animals. Lions showed white muscle with lots of fast-twitch fibres (mostly a type rarely seen in human athletes). Energy-wise, this explains why they and cheetahs are fast off the mark, but don't have the metabolism to sustain their speed.

Antelope were different. Given their dark red muscle, Kohn assumed they'd have lots of slow-twitch fibres. However, their fibre proportions were similar to a lion's.

"But the difference is that the fibres are unique - they can withstand fatigue." And single fibres from lion, though smaller than human fibres, produce three times more power. After publishing these results in The Journal of Experimental Biology, Kohn received emails from all over the world. Coaches wanted to know if humans would be able to train their muscles to develop this unique fibre type.

Kohn thought, why not?
He's aiming to find these potential enhancers, harness their capabilities, and determine whether high-intensity training can change the muscle of high-performance athletes towards a 'wild animal' phenotype.

"A human running at the speed of a cheetah?" Kohn muses. "Was going to the moon not impossible a hundred years ago?"