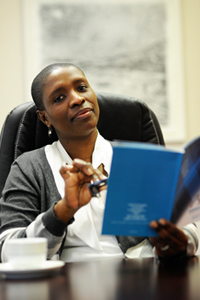 Report back: Ombud Zetu Makamandela-Mguqulwa looks through the latest annual report from the Ombud's office

The rising number of people using the Ombud's Office in the past 14 months reflected a growing acceptance by the UCT community that it was "a resource where people can be heard", said Ombud Officer Zetu Makamandela-Mguqulwa.

This follows the release of their second annual report.

The Ombud's Office was opened in 2011 as a safe and informal space for the UCT community to be heard and offers an alternative to other formal means of dispute resolution at the university.

"The existence of the Ombud's Office is itself an expression that the university cares and is willing to invest in alternative dispute resolution," Makamandela-Mguqulwa said. "A lot has happened in these two years; some people slept better, money was saved, various careers progressed and the office was able to create better understanding between work colleagues and students."

Issues raised in the period under review were grouped into nine categories. Of these, 196 concerns were listed in the Evaluative Relationships category; 72 in the Organisational, Strategic, and Mission Related grouping, and 71 in the Values, Ethics and Standards category.

Relationship concerns were cited most among the 642 matters raised by visitors (other than outsourced staff) to the Ombud's Office in the past year, and 40% of all matters brought to the office were rooted in relationship conflict, the report said.

"The university could learn through developing its conflict management capabilities and improving communication at all levels. Teaching the UCT community how to be conflict-competent would improve discourse on campus," added Makamandela-Mguqulwa.

Another challenge is that satellite campuses used the facility less.

"If people don't know I exist on campus, I need to introduce myself in person," said Makamandela-Mguqulwa. "But if travel is a challenge, careful thought needs to be given to whether the service can be brought to them without compromising confidentiality and independence."

Read the 2012 annual report (in English, Afrikaans, or isiXhosa) from the office of the Ombud

Story by Helen Swingler, picture by Jenine May