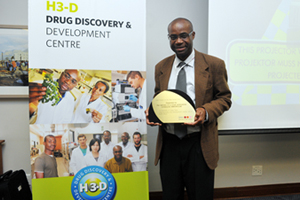 Reward: Prof Kelly Chibale was presented with a plaque by Dr Timothy Wells, from the Medicines for Malaria Venture, for his team's work on finding a single dose cure for malaria.

The UCT-led effort to find a single dose cure for malaria has been named the 2012 Project of the Year by Medicines for Malaria Venture (MMV).

Professor Kelly Chibale, founder and director of the H3-D drug discovery and development centre, and his team received this accolade at a Malaria Symposium held at UCT on Friday.

"UCT launched H3-D to focus drug discovery research on the development of an African solution to this largely African problem. Working with MMV and partners from around the world, we have been able to develop MMV390048 into a clinical candidate in record time and provide excellent, world-class training for the next generation of African scientists," comments Chibale.

We are very excited about the promise shown by MMV390048 against the blood stage of malaria," said Dr Timothy Wells, Chief Scientific Officer at MMV. "The compound is showing more potency than chloroquine or even artemisinin.

"The development of the MMV390048 shows once again that African scientists are rising to the challenge and taking the lead in malaria drug research," he adds.

Every year, malaria kills between 600 000 and one million people. Of those affected, over 90% are from Sub-Saharan African and 86% are below the age of 5. The malaria parasite is beginning to display signs of drug resistance, and thus there is an urgent need to develop new drugs to effectively treat the disease.

MMV390048 has now entered preclinical development, with partnerships in India, South Korea, the United Kingdom and the United States. The compound is expected to be ready for human testing in March 2014.

Read the full story in the upcoming edition of the Monday Monthly on 22 July.