Solomon and Marion opens at Baxter ahead of Edinburgh Festival 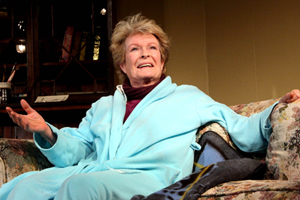 Following a successful Johannesburg run, Dame Janet Suzman and Khayalethu Anthony are back at the Baxter Theatre Centre to deliver 11 performances of Lara Foot's award-winning play Solomon and Marion until 20 July before heading to the Edinburgh Festival.

Solomon and Marion is the story of two injured souls searching for redemption in the fragile, post-apartheid South Africa. Marion has watched her life drain away. Children and husband gone, she ekes out an existence in a country utterly transformed. But it's the only home she has. As the new South Africa prepares for the World Cup finals, old divisions and suspicions seem as deep as ever, and the intruder she has been expecting, dreading and needing arrives. Can true reconciliation turn darkness into hope?

Suzman is an internationally acclaimed and respected South African-born actress and director who was made Dame Commander of the Order of the British Empire for her services to drama in the Queen's 2011 Birthday Honours. In December 2010 she received a Doctor of Literature honoris causa from UCT for her achievements in theatre.

With this production Suzman returned to the Johannesburg stage for the first time in over 35 years.