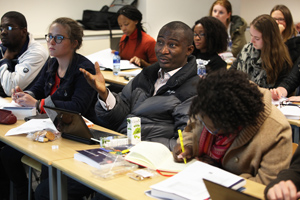 Getting to grips: Dr Akindeji Falaki (wearing black jacket) participates in the Poverty: "What it causes, and what causes it" course at the LSE-UCT July School on 2 July.

"Excellent" and "insightful and inspiring" were some of the ways students described the inaugural LSE-UCT July School that opened its doors this week, attracting students from more than thirty countries.

The school is the first such partnership between the London School of Economics and Political Science (LSE) and UCT and runs from 1 to 12 July, offering a range of short university-level courses. The two-week courses are convened by faculty of both institutions.

It closely follows the model of the LSE-Peking University summer school, which opened ten years ago, and UCT has become the fifth institution to partner with the LSE in this way.

Students Tizina Ramagaga and Joe Diwaare, who are both reading the Poverty: What it causes, and what causes it course, under the tutelage of the LSE's Dr Elliot Green, say it has been a very positive experience so far.

Ramagaga, whose sociology master's thesis explores inequality, says the course was directly applicable to her studies. 'Because the course is so intense, I've learnt quite a lot in just a few days,' she says.

Diwa wished to gain a 'deeper understanding' of poverty and its causes, as it was a problem that 'the whole of Africa' was grappling with. 'I want to be able to apply the policy implications to my country [Democratic Republic of Congo] in order to alleviate poverty.'

'For me it's really about works and what doesn't work when dealing with poverty,' added Dr Akindeji Falaki, also a student in Green's course. 'It makes you think deeply; there is never just one way to deal with the problems associated with poverty.'

The student list includes two mayors of South African towns, Albert Fritz (Hantam, Northern Cape) and Basil Kivedo (Breede Valley, Western Cape), who said that they were looking forward to applying what they learnt to their daily duties.

Ninety-nine students from 30 countries registered for the programme, which was open to anyone who was interested.

Green's course was the most popular at the first LSE-UCT July school, reported Mark Maloney, the head of academic partnerships in the LSE's external relations division.

Each course '“ the rough equivalent of a 3rd-year course in a four-year degree programme at UCT '“ will be 'intensive', with Maloney adding that some students may receive an official credit on their university transcripts on successful completion.

Because the LSE focuses on social science research, each of the six courses would fit neatly into a humanities or commerce study regime, with economic history, entrepreneurial skills and economic development courses among the offerings, he explains. The convenors were free to develop their own syllabi and assessment methods, so for the students, this means exam time when the last day comes.

While some competitors offer similar mid-year vacation programmes, few are as 'academically robust' as this one, says Maloney. 'It will be nine days of intense course-work and an exam on the tenth day,' he says.

It was also imperative that each course contained a clear 'African dimension', to ensure that the material was directly relevant to the continent's needs, he added.

'The idea is to bring people from different parts of the world to this programme to focus on Africa in an African context,' says Professor Thandika Mkandawire, the chair in African Development at the LSE. Mkandawire is convening a course titled The State, Democracy and Development in Africa at the winter school.

The programme could also boost the exchange of students and ideas between different institutions, added Dr Leigh Gardner, a lecturer in economic history at the LSE.

'[The school] also serves to broaden the nature of the research and the research base in Africa; just in our small field, in economic history, we are just catalysing African economic research,' says Edward Kerby, a doctoral student at LSE who is teaching on Gardner's economic history course. 'Some of the feedback we've already received from the students is that this is a topic that they would pursue in further research.'