UCT alumnus and medical specialist from Sierra Leone, Dr James Russell, is among a growing number of UCT-trained African specialists who are establishing world-class medical services in their home countries.

Russell, who completed his cardiac ultrasound studies at UCT, remains the sole cardiologist at the main government hospital, in Freetown, Sierra Leone's capital. With help and advice from colleagues at UCT, he has established his country's first high-care unit for patients with heart disease, and also set up its first ultrasound service.

His facility has fast become a national asset, saving countless lives through the early detection of pericarditis – inflammation of the membrane around the heart, often caused by TB – in a country where the latter condition is one of the leading causes of death.

Head of UCT's Department of Medicine, Professor Bongani Mayosi, explains how UCT's association with Russell exemplifies his department's role in building both relationships and capacity in Seirra Leone and elsewhere in Africa. 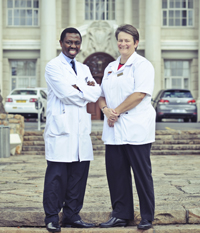 UCT's Department of Medicine, led by its head Prof Bongani Mayosi (left) and deputy director Prof Vanessa Burch, are helping train a new generation of medics from South Africa and the rest of Africa to address health issues that are particularly prevalent on the continent.

UCT's research engagement with other African countries is profound, says Mayosi. He uses the example of UCT's links with Sierra Leone to illustrate how just one relationship can spur on a life-changing series of events.

When Mayosi's predecessor, the late Professor Ralph Kirsch, visited Sierra Leone in 2005 he was introduced to Russell – then a recently qualified doctor who exhibited enormous clinical ability and leadership qualities. Although Russell was extremely interested in cardiology, there was no service of that nature in Sierra Leone, so Mayosi contacted the World Heart Federation to secure funding to support Russell's training at UCT.

After completing his UCT studies in in 2007, Russell returned to Sierra Leone and set about changing the face of healthcare in that country, establishing its first high-care unit and ultrasound service. As the country's only cardiologist, his contribution to Sierra Leone's healthcare was nationally acknowledged when he was named the country's Medical Doctor of the Year in 2008.

Russell is one of a vanguard of UCT-trained African specialists returning to their countries to practice, says Mayosi, who maintains that UCT's Department of Medicine is still in the formative stages of up-scaling the delivery of world-class health training for those committed to healthcare on the continent.

Russell and other continental counterparts are also members of the Investigation of the Management of Pericarditis (IMPI) Studies Network, which has invested tremendous resources to find solutions to managing pericarditis. Often caused by TB, this condition remains a major cause of death in Sierra Leone and in many other African countries, including South Africa.

Russell currently heads the IMPI network's first randomised clinical trial in Sierra Leone to investigate pericarditis and Mayosi has received the personal thanks of that country's health minister for his role as the catalyst for this research development.

"We did not foresee this sequence of events, but the interaction between UCT and Sierra Leone has resulted in the establishment of a completely new service which continues to save countless lives. This is an inspiring example of the essence of Afropolitanism," says Mayosi.

Academics in the Department of Medicine are working together with their counterparts elsewhere on the continent to build a strategic and systematic approach to medical training and professional development in Africa – and the process is already making a positive impact on healthcare in the region.

In line with University's Afropolitan research and professional development objectives, the department continues to take pride in providing world-class undergraduate and postgraduate training and research, which is underpinned by a deep understanding of the health issues facing the continent, says Mayosi.

Aside from training new generations of South African medics, the department offers medical practitioners from the rest of Africa the opportunity to specialise, and makes a concerted effort to enable deserving candidates to train at Groote Schuur Hospital.

Mayosi and deputy head Professor Vanessa Burch head up the 500-strong department, which comprises over 30 divisions and units, making it one of the largest and most comprehensive departments of medicine in Africa.

"We are arguably the most complete department of medicine on the continent in terms of the array of sub-specialities practised. In South Africa we have no equal in terms of the breadth and depth of our teaching and research," he asserts.

Citing the example of how Russell has made an indelible impact on his country's health provision, Mayosi emphasises how important it is that the training of a new generation of African health specialists takes place on the continent.

"Training must happen here; it not only helps strengthen institutions like universities and hospitals, but produces specialists that have a deeper understanding of the health issues that are peculiar to the continent and their regions.

"We are working together to improve and build capacity, as many of the health challenges faced elsewhere on the continent are the same here. The training of specialists from the rest of Africa has steadily increased over the years and follows our commitment to integrate our work with our colleagues and counterparts in the sub-region and throughout Africa," he says.

International trainees go by the somewhat curious title of 'supernumerary' registrars. The terminology stems from the fact that posts for local registrars are numbered on the post establishment of the training institution (such as Groote Schuur Hospital) and funded by the SA government, while additional posts, funded by other governments or other sources are not numbered – hence the term 'supernumerary'.

There has been a marked growth in supernumerary registrars over the past few years. When Mayosi took over the reins as departmental head in the mid-2000s, there was only one 'supernumerary' medicine trainee at Groote Schuur Hospital. Currently there are over 35 posts occupied by registrars from other African countries. Just over 20 are training as general specialists, while the rest are training in sub-specialities.

UCT's Department of Medicine remains one of a few medical departments in Africa engaged in a systematic approach to professional development in the areas of teaching and research.

Mayosi points to a trend whereby African doctors that train in the US, UK and Europe tend to remain working there. He believes this is partly because the type of training received there caters for the particular health needs of people in these developed countries, which may not be relevant to the health needs of Africans.

"African doctors who are coming to UCT to train almost always return to work in their home countries because they are a good fit for the type of healthcare needs in Africa."

Burch is involved in a Pan-African project, funded by the Foundation for Advancement of International Medical Education and Research (FAIMER) Institute, which trains clinical educators. She is working closely with an Ethiopian university to develop a curriculum and train fellows from several countries in the region. The FAIMER Institute's two-year fellowship programme for health-profession educators gives participants the knowledge and skills to play a key role in improving health-profession education in institutions in their home countries.

While Burch's work with FAMIER illustrates the Department of Medicine's engagement with building capacity in medical education, it also serves to support the growth of professional research networks.

"We believe our department provides a model for how to get on with the business of training people – at undergraduate and postgraduate level – and producing high-quality research," says Mayosi.

"It is our responsibility to create and maintain the type of training and health interventions that improve the quality of people's lives. We can do that by making sure that we use our capacity to ensure that our doctors, specialists and sub-specialists are trained appropriately to counter the diseases that occur on the continent.