UCT Libraries got their Africa Month celebrations off to a fine start with the 60th birthday of the Special Collections Section. These are now housed under one roof in the newly restored JW Jagger Reading Room, which Deputy Vice-Chancellor Professor Crain Soudien officially opened on 10 May.

"It's thanks to the vision of René Immelman, University Librarian from 1935 to 1970, that UCT's collections of African and rare published materials and manuscripts were begun" said libraries executive director Gwenda Thomas.

Successive library heads have continued to support the growth of these collections and their development into the fine research repository that it is today - attracting scholars both nationally and internationally.

The collections that make up Special Collections - the African Studies Collection, Manuscripts & Archives, the Audio-Visual Archive, and the rare books collections - include books, pamphlets, periodicals, photographs and film, archival material, maps and posters, and are renowned for their extent, their depth, and their uniqueness. 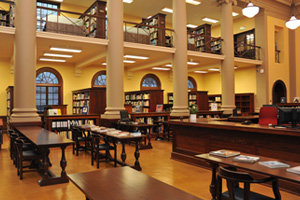 Extensive archive: Many of UCT's Special Collections, found in the newly launched JW Jagger reading Room, will be showcased during Africa Month.

A world-class collection deserves a fitting home; and to this end, the JW Jagger building has been painstakingly restored, reflecting an international emphasis on the importance and centrality of special collections in academic libraries.

Designed by JM Solomon, and one of the first buildings erected on the Groote Schuur campus, the JW Jagger Reading Room once again exudes a gracious and scholarly ambience.

Since it re-opened its doors in August last year, the many very favourable comments from researchers attest to the success of this vision.

The official opening last week will be followed throughout Africa Month by events that showcase some of the collections. There will be screenings of African films from the extensive audio-visual archive, displays showing examples from some of the 'manuscript, rare book and Africana collections', and a digital and print exhibition of maps of Africa.