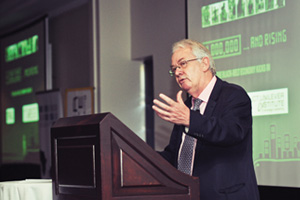 "South Africa's black middle class continues to expand rapidly, and is more influential and powerful than ever before," said the Unilever Institute's director, Professor John Simpson, at the Cape Town presentation of the 4 Million and Rising study on 9 May.

South Africa's black middle class has more than doubled over the past eight years, growing 250%: from 1.7 million South Africans in 2004 to an estimated 4.2 million last year.

This dramatic growth has been revealed by new research conducted by the UCT Unilever Institute of Strategic Marketing. The Unilever Institute's latest study on the black middle class, titled 4 Million and Rising, has found that the annual spend of the black middle class began pulling ahead of that of their white middle-class counterparts in 2008. It has since skyrocketed to over R400-billion per annum.

"Despite setbacks caused by the recent recession, South Africa's black middle class continues to expand rapidly, and is more influential and powerful than ever before," said the Institute's director, Professor John Simpson. In contrast, the white middle class has remained fairly stagnant over the same period, with its adult population growing from 2.8 million in 2004 to 3 million in 2012.

Simpson, who led the 4 Million and Rising study, said it was important for business and industry to understand this market better, in order to facilitate the provision of goods and services to meet its needs.

"That this market continues to grow and prosper is crucial to the health and future of the economy. The black middle class is helping create a vibrant and stable society by increasing South Africa's skills base, deepening employment, and widening the tax net.

"As this market has matured, it has become much more complex than marketers and advertisers have assumed. Marketers are not adjusting fast enough to meet the needs of this rapidly transforming market segment. This new order demands new strategic thinking from businesses and manufacturers; from how they both create and sell products, to the way they distribute and market," he added.

Simpson said that for marketers, one of the most important changes in this target market over the past decade relates to connectivity. An estimated 95% of the black middle class now own cell phones, compared to 64% in 2004. Correspondingly, the advent of smartphones and increased internet access have seen internet usage quadrupling over this period.

Researchers found radical changes in consumer behaviour over the past eight years, due in part to the intervening recession and the enduring economic downturn. In turn, these factors have affected the job market, and 66% of those surveyed maintain that getting a job is harder now than it was five years ago.

"All these factors have led to a new financial conservatism, with respondents reporting that it is no longer 'bling' at all costs," said Simpson. In contrast to the Institute's studies on the black middle class in the early 2000s, which revealed rampant spending, the majority of participants in the 4 Million and Rising study reported curbing their spending and only using credit when something was absolutely essential. Of those surveyed, 80% reported they were now more cautious about spending, while 22% admitted they were struggling to manage their debt.

The recent study also showed significant changes in consumers' relationships with brands. While respondents had reported previously that brands helped to define their identity, this attitude has shifted, with most of those surveyed now viewing brands as extensions of their identity, said Simpson.