He didn't look it, but Athini Nkota was feeling the pressure.

The grade 11 learner from Zola High School in Khayelitsha was one of more than 7 000 participants waiting to get stuck into the annual UCT Mathematics Competition on 17 April. This year, a record 164 Western Cape schools registered their top mathematics learners to tackle 30 challenging brain-teasers.

"I'm feeling a bit nervous, but I'm trying not to show people that I am!" said Nkota, who first participated in the competition last year. "It was a bit difficult [last year], but this year I'm better prepared because I've had enough time to study, so I'm feeling a little bit confident in myself to do great."

While many competitors' jitters were not only caused by the chilly weather , matric learner Esnurt Foloman couldn't wait to take her final stab at the UCT Mathematics Competition.

"It's my last year here, so I have to be confident," the Hout Bay High School learner grinned, adding that she wasn't taking the event lightly. "Sometimes I feel like it is easy, but it's not."

The competition was a step towards her projected career in the sciences, she said. 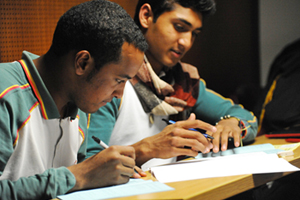 One first-timer, Rhinus van Rensburg of Strand High School, seemed to be taking it all in his stride.

"I've worked through some of the previous tests, so I'm not too nervous," said the grade 10 learner while enjoying a toasted sandwich.

More than 200 high school mathematics teachers set the question papers - a separate one for each grade - with the assistance of 30 UCT students. The competition is the biggest of its kind in the world, with all the participants writing the papers at the same time and place.

The competition is about more than just a single evening's work, says competition director Professor John Webb, of UCT's Department of Mathematics and Applied Mathematics.

"In the days after the competition a good deal of time is spent in the school classroom discussing the competition papers," says Webb. "The more challenging problems not found in standard textbooks and exams help develop insights into mathematics."

The 30 best-performing students from each grade are also invited to join the UCT Mathematics Circle, a programme of lectures and discussions during which UCT academics introduce the young mathematicians to topics outside the school curriculum.

From that pool, and after a few more selection funnels, the South African team for the International Mathematics Olympiad is selected, a competition that will be held in South Africa (and at UCT) for the first time next year.