What you said on 20 February 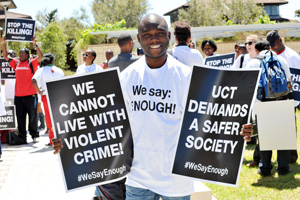 John-Paul Banchani: "I'm an advocate of a violence-free society and I thought that by enlisting onto this protest, I'm making a very big statement. We only hear government officials come out to make statements but we do not see policy that works for us." 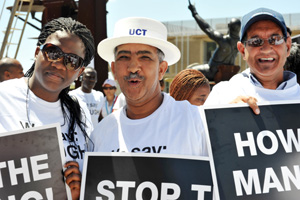 David Wilson (middle): "We need to stop people being killed and raped. If the government could create more, job-wise, I think some of these things would probably fade away. We do this to show our solidarity with people that have lost loved ones." 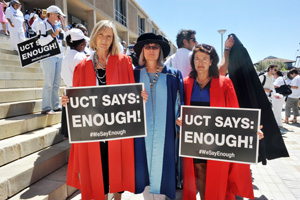 Assoc Prof Jane English: "Marches like this achieve publicity and exposure and draw attention and awareness to issues like rape. Such protests are part of UCT's heritage." Dr Miqnonne Breier: "The march prevents one from saying that 'these things are out there' and brings issues like rape home to the ivory tower." 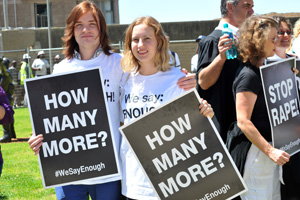 Student Georgie Berens: "It's all about publically showing our disgust at rape. It's all very well to say rape is terrible, but you have to do something about it. It's not fair to feel unsafe in your own country." Student Michael Goldsmid: "Marches like these do achieve change, and it's important that the university community is engaged in issues of this nature." 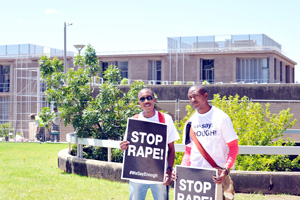 Students Sobane 'Sox' Motlomelo (left) and Aubrey Dime Kekanana: "We feel that as part of society, what has been done to women recently does not portray what all men are about. So we want to put a stop to that. And the sad thing is, they don't just rape women, they kill them too. It comes with all the violence." 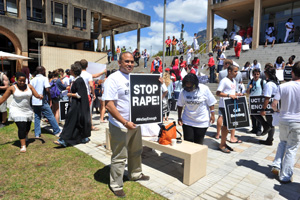 Leon Petersen: "The march is good, but it shouldn't end with this. We need to take the message from the march into our homes and communities. We say 'enough is enough'." 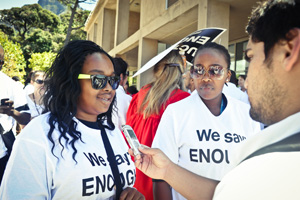 Xhosa Graduation: "I was watching the news and the only thing I saw other than rape was the Oscar Pistorius story. Everything else was about rape. It's enough! The justice system is just too poor. It's important to make our voices heard. If we keep quiet about it then our future will be like this." 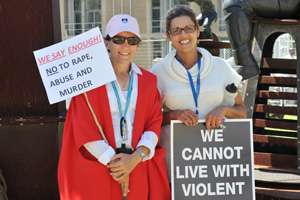 Prof Jennifer Whitall: "Marching is a demonstration of mass action and reflects the campus community. It might not change individual behaviour but I think it's certainly a great symbol." 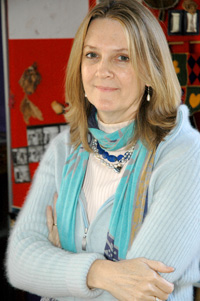 Prof Pippa Skotnes: "The university also has to couple this kind of thing to more creative, intelligent ways of thinking of how we solve the problem, which I think is one of Max's initiatives. That combination of public protest as well as really trying to find solutions is important ... As long as we have a society that valorises men from politics down to sport to the exclusion of women, I think we've got real problems." 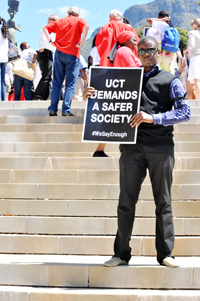 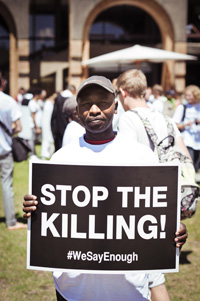 Steven (surname withheld): "My mother was also a victim of a rape three years ago. My father was killed during that rape, so I had to join this march. I don't want to blame government for allowing such crimes. I blame the society, because these killers are staying with us."