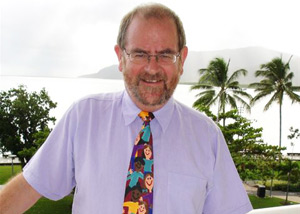 Remembered: UCT's Honorary Prof Gavin Mooney, hailed as one of the founding fathers of health economics in South Africa, has died.

Honorary Professor Gavin Mooney, a UCT scholar acclaimed for his part in developing the discipline of health economics in South Africa and at UCT, has died. Australian media reported this week that Mooney and his partner, Dr Del Weston, were both murdered in their home in Tasmania.

Mooney was associated with UCT's Health Economics Unit (HEU), in whose establishment he was also instrumental. In recognition of his international achievements, UCT had named Mooney an honorary professor in 2008, and awarded him an honorary doctorate in social sciences in June 2009.

UCT has hailed Mooney as one of a small band of pioneers who developed groundbreaking techniques for applying economic theory and principles to the health sector.

"His work contributed to the establishment of UCT's Health Economics Unit and, through his writings and personal influence, he has helped South Africa to achieve a more equitable health policy," commented Professor Thandabantu Nhlapo, Acting Vice-Chancellor at UCT.

In the late 1980s, a period of international isolation for apartheid South Africa, Mooney's books and articles were some of the few resources available to aspiring young health economists in South Africa. These writings helped develop their understanding of the theoretical and methodological basis for their work.

His seminal article, Equity in Health Care: Confronting the confusion, published in 1983, is still prescribed reading for health economics students as an entry point to understanding equity issues in the health sector.

"Probably Professor Mooney's most important contribution has been to open up for debate the value base of the health economics discipline," read the UCT citation for Mooney's honorary doctorate. "In particular, he has led the way in challenging the prevailing orthodoxy in much of health economics which prioritises concerns with efficiency over the distributional consequences of decisions."

Mooney had held an honorary position in the HEU since July 2008. He spent two or three months a year working there (initially on a Mellon mentorship) to develop the skills of HEU staff and support them in publishing their work. Weston typically accompanied Mooney on his visits to UCT and, in the course of her work on her PhD on the political economy of global warming, engaged with various UCT academics working on environmental issues.

In addition to his UCT position, Mooney had served as honorary professor at the University of Sydney and was a Visiting Professor at Aarhus University, Denmark. "On behalf of the university, I extend condolences to the families of Professor Mooney and Dr Weston," said Nhlapo.