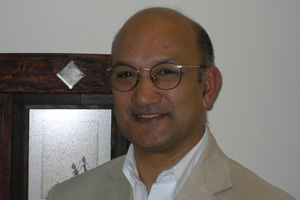 New challenges: Prof Daya Reddy has been elected as president of ASSAf, while his international research networks also received a recent boost.

The next couple of years are going to be pleasantly busy ones for UCT's Professor Daya Reddy.

Firstly, Reddy, who holds the South African research chair in computational mechanics in the Department of Mathematics and Applied Mathematics, was just recently inaugurated as the president of the Academy of Science of South Africa (ASSAf), a post he will hold until 2016. That ceremony hardly done, Reddy was informed that he had won the Georg Foster Research Award, worth €60,000 (or nearly R700,000), from the prestigious Alexander von Humboldt Foundation in Germany.

Both will keep Reddy's dance card pretty full over the coming years.

At ASSAf, he hopes to build on "the very solid foundation established by my predecessors", says Reddy. That will involve expanding the academy's international role, tackling substantive issues with kindred academies in Africa, the Americas, Asia and Europe. Another area he wants to expand is in relation to the Academy's core mandate of providing evidence-based policy advice to government and other institutions, a commission in which Reddy would like to see more ASSAf members involved.

In turn, the Von Humboldt money will have Reddy spending a few months every year at the Institute of Continuum Mechanics at the Gottfried Wilhelm Leibniz Universität Hannover, aka the University of Hannover. Here he and longstanding collaborator Professor Peter Wriggers will work on a range of problems to do with the multi-scale modelling of material behaviour.

"Academy work is fascinating and important, and consonant with my various scholarly activities," Reddy says on his new ASSAf role. "I am looking forward immensely to contributing towards the further growth and impact of the Academy."