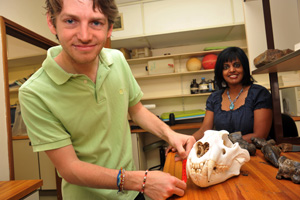 Bone collectors: Nick Fordyce with Prof Anusuya Chinsamy-Turan have made some eye-catching discoveries about some of South Africa's prehistoric creatures.

The fossils of pre-historic animals, often found in bits and pieces, are jigsaw puzzles that have to be pieced together, calling for lots of study and deductive reasoning.

Palaeontologists in UCT's new Department of Biological Sciences have recently been applying their sleuthing skills to two fossils dating back hundreds of millions of years. In the first of two studies, published online in the US-based Journal of Vertebrate Palaeontology, honours student Tobias Nasterlack, working with postdoctoral research fellow Aurore Canoville and palaeobiologist and head of department Professor Anusuya Chinsamy-Turan, picked and prodded at the skeletal remains of a toothless mammal-like reptile known as Cistecephalus.

In so doing, the team hoped to glean insights into the lifestyle and habits of this 40cm-long creature, which lived 255 million years ago in the area now known as the Karoo. Was it, as has been debated, aquatic, amphibious, a tree climber or - the more popular theory - a burrower?

"Bone microstructure is a powerful tool that enables deductions about the lifestyle of extinct animals," explains Canoville.

What they have been able to observe from the adults' thick-walled bones, for example, is that they are similar to those of many digging animals of today; suggesting that Cistecephalus was not a tree climber, but rather a burrower.

In a second study, published in the South African Journal of Science, honours student Nicholas Fordyce, working with Chinsamy-Turan and Roger Smith of the Iziko South Africa Museum, has shed a light on a 2530-million-year-old murder mystery. His research pointed the finger for the killing of a plant-eating reptile known as a dicynodont - specifically one named Mamafura, whose partial skeleton was discovered in 1984 - at a suitably vicious-looking carnivore known as Aelurognathus.

The researchers came to this conclusion because of the smoking gun found near the scene of the crime: a 3.5cm-long, sharply-pointed, curved and serrated carnivore canine. In Aelurognathus's defence, other forensic evidence - notably the belly-up posture of the skeleton and the mudrock around it - would suggest that Aelurognathus had merely come across Mamafura's carcass after it had drowned, and opportunistically fed on it, losing the tooth in the process.

"Fossils provide us with a unique opportunity to learn about how the world and its fauna and flora have changed through time," says Fordyce.