UCT centre beefs up its pursuit of catalysts 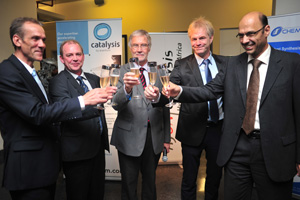 'State of the art' is a catchphrase that one suspects gets thrown around way too carelessly.

But by all accounts, two new pieces of equipment recently acquired by the HySA/Catalysis Centre of Competence, in partnership with UCT's Centre for Catalysis Research, are more than worthy of such exalted praise. The machines are an Isynth catalyst-preparation robot, produced by Swiss company Chemspeed; and the Flowrence high-throughput 16 parallel fixed-bed reactors, a piece of equipment developed by Dutch company Avantium.

Together these two acquisitions, known as high-throughput technologies, are set to beef up the development and testing of catalysts - the substances that underpin hydrogen fuel cells by separating hydrogen from water molecules and fossil fuel, and then splitting those hydrogen molecules into ions and electrical current - at HySA/Catalysis.

Chemspeed's Isynth allows researchers to explore the design of not just one but several catalysts at the same time, giving them the freedom to work with anything from gases to liquids to solids, and very small volumes at that. (The Centre's focus is on catalysts produced from expensive platinum, which they necessarily need to use sparingly.) In turn, on Flowrence they can test an array of catalysts simultaneously - or one catalyst under a variety of conditions - while fine-tuning variables such as temperature, pressure and flow.

As a package, the two instruments will fire up HySA/Catalysis' ambitions to produce in short time a suite of market-ready catalysts.

"As this type of equipment performs a lot of the time consuming and repetitive steps usually performed in the laboratory," says Niels Lüchters, research officer in the Centre for Catalysis Research, "this will free up time for the researchers involved to spend more time on thorough analysis of data collected and work on new innovative approaches."

The technologies also put HySA/Catalysis on par with industry and research institutions around the world, observes director, Dr Olaf Conrad. The next step, he cautions, is to get the best out of the equipment.

"To really claim a spot among the globally leading catalysis research organisations, we will now have to incorporate the competency in our daily research activities and train a next generation of chemical engineers."