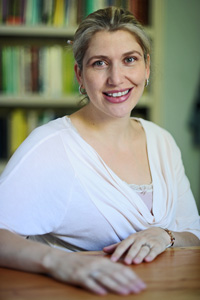 Upward and onward: Dr Amanda Weltman has become only the fourth UCT scholar to be elected to the South African Young Academy of Science.

The good standing of two young UCT mathematicians-slash-physicists - and they happen to be a couple - should help allay any concerns that their department may have about where its next generation of scholars is coming from.

Firstly, Dr Amanda Weltman, based in the Department of Mathematics and Applied Mathematics where she works on string theory and cosmology, has been elected onto the South African Young Academy of Science (SAYAS) for 2012. She was the only UCT member to have passed muster in the recent - and very selective - SAYAS selection process, and she is now one of only four UCT faculty and 30 country-wide to have been named SAYAS members.

Formally launched in 2011, the academy sets out to give young scholars a platform from which to interact and set up networking opportunities with national and international peers.

Weltman's spouse, Dr Jeff Murugan, also in the maths department and also working on string theory (and quantum gravity), was one of the 20 founding members elected to SAYAS last year, along with UCT colleagues Dr Shadreck Chirikure and Associate Professor Genevieve Langdon. More recently he and one other SAYAS member were chosen to travel to The Netherlands to act as South African emissaries at a symposium hosted by the Royal Dutch Academy of Science on young academies of science.

In just a week or so ago, Weltman also represented SAYAS at a Europe-South African young scientists workshop.

As Murugan's trip and Weltman's workshop illustrated, SAYAS does offer an invaluable opportunity for South African scholars - geographically isolated from the scientific hub of the US and Europe - to network across international boundaries. That's useful even in these days of easy electronic communications, says Weltman.