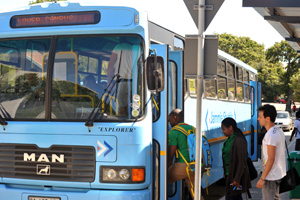 The Jammie Shuttle buses, a shuttle bus service for UCT staff and students provided by Sibanye Bus Services, have been fitted with seatbelts on certain seats to make them safer for passengers. These seat belts can be found where there are no barriers in the seats in front of passengers.

In addition, as from next year there will be no more standing passengers on the Hiddingh route.

These are two of the steps the university has taken to make travelling on the shuttles more enjoyable, and following recommendations by Aurecon, the university's transport consultants.

Aurecon was tasked to investigate concerns that there were no seatbelts in the shuttles travelling to and from Hiddingh campus, and that passengers often have to stand during this trip.

They also investigated reports of speeding on the freeway.

They found that although the shuttles were meeting legal requirements, there was room for improvement.

According to the Aurecon report, any of the buses with seating for fewer than 35 passengers first registered after 1 July 2006 must be fitted with seatbelts on seats where there are no barriers to stop a passenger falling forward in the event of sudden braking.

As the Jammie fleet was registered in 2005, there is no legal requirement for seatbelts. Also, the operating licences make provision for standing passengers.

However, Aurecon recommended that seat belts be installed on all seats without a solid barrier immediately in front of them, and that no standing passengers should be permitted on the Hiddingh route.

As for reports of speeding, all shuttles are fitted with a sophisticated tracking system, which records the driver's actions and monitors speed, acceleration and the use of brakes and clutch. Where vehicles exceed the set speed limits, the system generates a violation report, recording the 'penalties', in terms of Sibanye's contract. The penalties are offset against Sibanye's monthly invoices.