The sneaky bird catches the worm 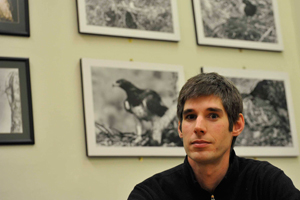 It would perhaps be wrong and unfair to assign human attributes to the fork-tailed drongo.

That said, on hearing about the foraging habits of these insectivorous birds, the temptation is to start throwing around labels like 'wily', or just downright 'sneaky'. Dr Thomas Flower, a postdoctoral research fellow from the UK now based with UCT's Percy FitzPatrick Institute of African Ornithology, has been tracking the drongos for years, so it's no surprise that he has a few choice descriptives of his own.

But name-calling aside, Flower is also enthralled by the birds, specifically the ones found in the South African Kalahari.

It's not that they're full-time kleptoparasites, he's found. It's a seasonal thing, he explains in the Animal Ecology paper, stealing food mostly in the winter to complement their staple diet of flies, whose numbers drop in the cold season. At such times, the rewards from stealing are just much greater than foraging, Flower explains. 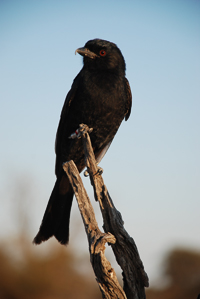 Sneak attack: The drongo has become a master at conning other animals out of their food.

What's really impressive is how drongos go about their stealing, says Flower. The first of their two MOs - which they split nearly 50/50, according to his count - is straightforward: brute force. This is when the drongos, small birds by any measure and really no bigger than a swallow, simply attack other animals handling food, screeching, grabbing and pecking away at other birds. The genteelly-named sociable weaver commonly falls prey, for example.

But they're not just bullies - they don't pick on smaller birds only. Drongos are not afraid to attack birds of prey, like hawks. They're very acrobatic, says Flower - "insanely good fliers".)

It's when they have to contend with larger creatures who may put up more of a fight, like the meerkat, or larger birds like the pied babbler - two marks of choice - that the drongos get really clever.

In the wild, explains Flower, animals rely on the calls of other animals to alert them to any predators, especially during feeding times. The drongo has learnt to exploit that predicament, using false alarm calls to dupe animals into abandoning meals that they can then pounce on.

And when the animals get wise to their trickery, the drongos show that they're no one-trick ponies. Renowned as mimics, they resort to impersonating the calls of other animals, using the call of a pied babbler to mislead other pied babblers, for example. And when the babbler (say) cottons on to to the deception, the drongos will adopt another animal's call - even mammals like the meerkat - to the same good effect.

"They can just keep one step ahead of the game," says Flower.

There's much more Flower wants to learn about the drongos' kleptoparasitism. Such as, is it innate or learned? And is it passed on from community to community or, as an evolutionary advantage, from generation to generation? And does it have anything to do with the size of their brains, relatively big for such a tiny bird? And how - if at all - are they able to sense other animals' states of mind, understanding when to change their calls?

The answers could shed light on some big questions about the evolution and minds of birds and animals. For now, however, one thing's for sure - whatever names one chooses to call the drongo, 'bird-brained' would not be one of them.