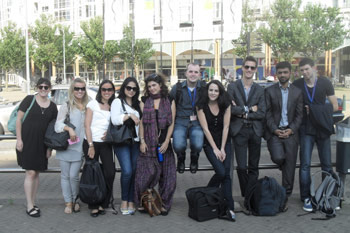 Pals: Melani van der Merwe (fourth from right) made some good friends in The Hague while learning about peace and security.

"Enriched on every level."

That is how UCT master's student Melani van der Merwe describes the pay-off from her time at the 2012 Hague Symposium on Post-Conflict Transitions and International Justice, held in The Netherlands in July and August.

Fifty-three students from around the world gathered at this leadership training initiative, offered through the International Peace and Security Institute, based in Washington in the US, to develop the skills necessary to restructure post-conflict societies. The students attended lectures delivered by experts in the field, visited International Tribunals and courts, and took part in interactive simulations and workshops.

Van der Merwe, working on her LLM with the Centre of Criminology at UCT, and her peers also worked through various case studies.

"I met some of the big guns in my field and had the most stimulating conversations with these intellectual giants," van der Merwe chronicles in her post-symposium report. "My ideas and arguments were constantly challenged and enriched for a month by 53 participants and seven staff from 26 different countries."

For the final simulation, intended to introduce the students to the complexities of "war and peace and all the greys in between", Van der Merwe assumed, for an entire week, the role of a warlord in the fictional conflict zone of Kanryanstan in Asia, with a Canadian peer playing an Indian ambassador.

"All we spoke about, day in and day out, was my risk of prosecution by the ICC [International Criminal Court] and deals that could be struck to obtain peace," records Van der Merwe.

The secret meetings that week, formal lectures and robust debates during the symposium all began to show Van der Merwe and her fellow participants "just how hard it would be to try and make a one-size-fits-all model for post-conflict transitions", she says.