The computational revolution bringing about change 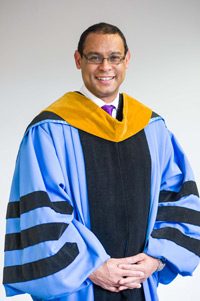 Change is coming: Prof Kevin Naidoo spoke, in his inaugural lecture, of the revolution brought about by high-performance scientific computing..

In the beginning, there were the theorists.

These natural philosophers, of which Thomas Hobbes (1588-1679) was perhaps the strongest proponent, lay the foundation of the natural sciences, explained Professor Kevin Naidoo, director of UCT's Scientific Computing Research Unit (SCRU) and holder of a national chair in scientific computing, in his inaugural lecture on 3 October.

In time, however, Naidoo went on, the theorists were upstaged. The likes of Robert Boyle (1627-1691), one of the pioneers of the modern scientific method, and others insisted that no reputable science could be conducted without experimental observation.

For centuries the back and forward interplay between theory and experiment, sometimes at odds with each other but codified by institutions like the Royal Society of London for Improving Natural Knowledge, would define how the sciences were practised and preached.

But, as suggested by the title of Naidoo's lecture - The Computational Revolution and how it is Reshaping the Scientific Method in Chemistry and Chemical Biology - changes are afoot.

Using (computerised) Lego blocks to explain how atoms move and molecules are built, he illustrated the limits of modern experimental observational. Working in a lab, scientists would not be able to, for example, create a new reaction using an enzyme as a catalyst because they cannot, for now, send video cameras into the recesses of the complex enzyme to see and modify the chemical reaction. And even the best cameras around would not be able to zoom in on a molecule measuring one-billionth of a metre, or capture a chemical reaction taking place at one-millionth of one-billionth of a second.

"We don't have the tools to perform the experiments," Naidoo said. "Or do we?"

The advent of high-performance computers has allowed modern-day scientists to push the boundaries of what scientists can do, he observed.

Of particular interest to Naidoo and others at the SCRU have been the advances made in the once overlooked field of chemical glycobiology, the study of glycans, better known as carbohydrates. It's a field that's caught the attention of many others as well. These carbohydrates or saccharides play a critical role in protecting viruses from attact (a sheath of protective complex carbohydrates surround the HIV, for example) and stopping tumours from being eliminated by our natural defences (there's a telling modification of the carbohydrates that sit on the surface of cancer cells, preventing the body's antibodies from attacking the tumour).

Carbohydrates also have a part to play in renewable energy, in the form of long-chained cellulose, which can be broken down and converted into a biofuel known as ethanol. ("It's the most abundant organic molecule in the biomass," said Naidoo of cellulose's importance.)

Two of the five techniques that international agencies, like the US's National Institutes of Health and its Department of Energy, have listed as critical to advances in glycosciences are molecular modelling and informatics, Naidoo recounted.

That's because, he asserted, "critical experiments that are not possible with physical models can be performed using computational models".