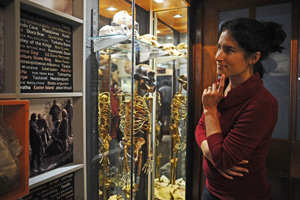 Eye-catching: The collection of early-human fossils on display caught the eye of Carol Orton, one of the first visitors to the exhibition.

The long-awaited healing of a sore point is how Professor Judith Sealy, head of UCT's Department of Archaeology, described the new exhibition of archaeological artefacts and images in the Beattie Building.

Speaking at the opening of the exhibition - to be found in the foyer of Beattie's level 3 - on 2 October, Sealy praised the efforts of Professor Pippa Skotnes and her team for putting the display together, a feat which, Sealy said, many had tried and failed to do in the past.

The glass cabinets filled with the skeletons of early human beings, Stone Age tools and a variety of photographs capturing the department's expeditions through the ages were the fruit of Skotnes et al's digging through countless boxes in the archaeology storeroom, and include what Sealy says are "spectacular objects".

Skotnes, convenor of the postgraduate programme in the Michaelis School of Fine Art, said the exhibition documented not only the history of archaeology in South Africa, but also of the discipline in Africa and world.