UCT to celebrate life and achievements of pioneering physicist 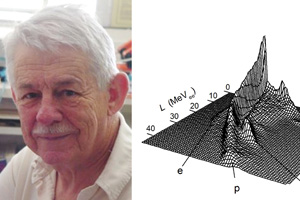 UCT has lost a dedicated academic, who was considered a pioneer in the physics and application of neutron detection and spectrometry.

Emeritus Professor Francis Dey 'Frank' Brooks, 80, of the Department of Physics, died on 30 August, a few days after suffering a fall. He was born on 9 December 1931 in Pretoria and studied physics at Rhodes University. After working in England for a while, he returned to South Africa in 1964 to take up the newly created Chair of Nuclear Physics at UCT. He held this position until his formal retirement in 1996.

Brooks' research will be particularly remembered for his application of the technique of "pulse shape discrimination" which allows the identification of different types of charged particles in certain scintillator detectors by means of the characteristics of the scintillation decay.

"Frank's teaching mirrored the way he thought about research," says Associate Professor Andy Buffler, head of physics. "His lectures were extremely well structured, often supported by carefully hand-written notes, which he always made available to students."

In the course of his career Brooks supervised 19 MSc and 18 PhD students. He also served as head of the department between 1979 and 1983.

He will be remembered as "a trusting and unassuming colleague, a loyal supervisor, a passionate educator, an innovative and intuitive researcher, and above all, a gentleman". Buffler further described him as "a meticulous writer", who "cared passionately about producing scientific prose which was both succinct and accurate".

He is survived by his wife, Kathleen, his children, Louise, William, Peter and James, and eight grandchildren.

The physics department will host an event to celebrate his life and achievements on Friday, 26 October at 16:00 in the RW James building.