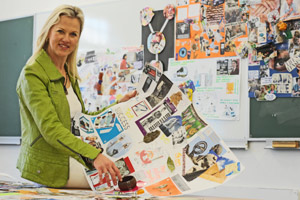 Giving back: Assoc Prof Annemarie Hattingh has dedicated herself to a mentorship programme aimed at women, following her being named the Most Influential Woman in Business and Government in the training and education category.

Associate Professor Annemarie Hattingh of UCT's School of Education is one of the Most Influential Women in Business and Government (MIW) in South Africa.

This, at least, is according to CEO Magazine, in which she was profiled after winning in the education and training category.

Every year the MIW awards recognise the contribution of South African women across a range of sectors. The winners in the various sectors are announced at gala events in three cities, including Cape Town, in August.

Members of the public nominate candidates who are then subjected to a rigorous process, which includes three judging panels. The last hurdle is a recorded interview, where finalists in each category are asked the same questions. The last judging panel gets to view these interviews, which largely decide who the winner is.

Hattingh initially completed a BSc-degree but has been involved in education for the past 24 years. Her passion is for more women to complete doctoral studies. Thus for the past 10 years she has been involved in a project that assists and encourages women to enter PhD programmes by creating a "community of practice", where students not only interact with and support each other regularly, but they are mentored by a team of supervisors.

She is also one of the winners who has agreed to be part of a mentoring programme, run in partnership with the National Youth Development Agency. She and five other winners will in the course of the year address women in Cape Town, Johannesburg, Durban and Port Elizabeth.

"These awards are a way of identifying female mentors as much as it is about acknowledging inspirational women," she says.