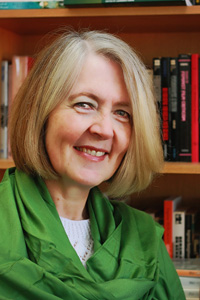 Building on her longstanding interest in the cinematic traditions of the continent, Associate Professor Lesley Marx and her assistant, Alta du Plooy, have been busy promoting the interests of the African Cinema Unit, based in the Centre for Film & Media Studies (CFMS). In July the ACU hosted the Alternative Africa Film Festival, where some "very strange underground and cult films" were screened. Then in August it welcomed local filmmaker Jyoti Mistry for a book launch and screening programme. On 25 and 26 September it will host a screening programme and panel discussion with film director Ross Devenish, and on 12 October UCT alumnus Oliver Hermanus will conduct a Master Class. Stealing the headlines, though, is its new MA in African Cinema, presented through coursework and dissertation, which starts in 2013.

We spoke to Marx briefly about the ACU and its plans.

MP: What will the ACU look like? And how far along is it?

Lesley Marx: What we've done to get it up and running is to have a series of events. (See above.) The nice thing about the Jyoti Mistry book launch was that deputy vice-chancellor Professor Thandabantu Nhlapo was there, and gave his verbal and moral support. We'll see about the financial support when the time comes, he said. We also had Professor Deborah Posel, and I was so grateful to her because we're trying to create ties with HUMA (the Institute for the Humanities in Africa) and also with the African Gender Institute, with which we had our first partnership in the visit of Ghanaian feminist filmmaker Yaba Badoe. She has been very helpful in giving us leads to key filmmakers in the rest of Africa, which is one of our main aims - to reach into the continent, to get people to come out here, to organise retrospectives, to have and to attend film festivals, to have and attend symposia and conferences; that's the kind of big picture down the line.

MP: What have been the ACU's roots at UCT?

LM: We've already had, running for several years, a third-year course in African cinema. But, of course, one 12-week course running at undergraduate level on films from the whole continent really just gives students a taste of what African cinema encompasses. It's just a tiny little taste. Now we have approval to start our MA in African Cinema, though, and that is much more clearly devoted to a higher level of intellectual engagement with the field. The programme will also offer a space for scholars of African cinema and African filmmakers to engage in discussion and debate with teachers, researchers and students. Personally, I have an enormous interest in North African women's films - I think they're absolutely fantastic and I think we need to get those filmmakers out here.

LM: We're developing it. It's very much a case of early days. I think it's going to be an appealing degree to students from outside of South Africa, but there is also interest from inside South Africa.

MP: What kinds of films are you going to be looking at? Just the serious stuff? Not Leon Schuster, I assume?

LM:Well, I think we should be looking at Leon Schuster - he is the most commercially successful filmmaker in the country, after all. We want to make the third-year course much more contemporary. We want to position the film texts much more fully in the moment of the students' own experiences, and get them excited so that they will be eager to explore the astounding worlds of African Cinema from the rest of the continent. Importantly, we also want the MA to explore the incredible archive of films that our libraries already have. See Films for Africa.

MP: What has motivated you to galvanize the ACU?

LM: We have a generous start-up grant from UCT, and I have developed a stronger interest in African cinema over the years. I've always had a deep interest in South African cinema, but because I've been teaching on the undergraduate course I became immensely more interested in African cinema more broadly. There's no shortage of films. It's escalated immensely over the past few decades - Nollywood [Nigerian cinema] is hhhhuuuuge - so we're just trying to alert people to the richness of filmmaking on the continent.