A week in the life of the ICTS Front Office 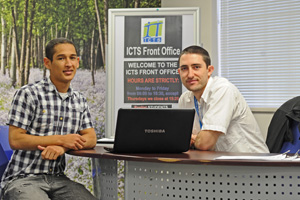 Fighting fit: The inaugural lecture of Prof Valerie Mizrahi highlighted her contribution, together with collaborators and students, to the ongoing fight against tuberculosis.

The IT Helpdesk service does not currently offer telephonic IT support to undergraduate students. So what do they do when they are having computer troubles? Where do staff members with IT problems go if they want quick, face-to-face service? They go to the Information and Communication Technology Services (ICTS) Front Office, which is situated on upper campus and is staffed with knowledgeable people such as Ruan Vosloo (right in picture) and Nizaam Amlay. We asked these two Front Office staff members about their typical week.

What is a typical week in the office like?

"Most of our time is spent assisting students and staff in setting up their wireless connections, changing their passwords and advising them on IT-related matters," they say. The Front Office also provides a fax service allowing staff and students to send and receive faxes. "The time that the Front Office is busiest fluctuates from day to day. People come in whenever it is most convenient for them, so we're mostly busy during lunchtime," says Amlay. "I would say we get on average between 100 and 200 queries in a busy week. On a busy day we get between 20 and 40 queries, and on a quiet day between 10 and 20."

What are your most common support queries?

With the introduction of the eduroam wireless network across campus, the most frequent help requests are now for setting up wireless connections on mobile devices, mainly phones and laptops. "The second most common query is for password changes, which we handle by directing users to the password self-service page, which they can access from one of the self-service PCs in the room." says Vosloo. Another frequent request is to assist with setting up anti-virus programmes on people's computers. The team installs McAfee, which is free to all students and staff at the university. They also act as a drop-off and collection point for staff equipment when machines are to be sent to the ICTS workshop for fixing or upgrading.

What are the highs of the job?

"I love helping people and solving problems," says Vosloo. "It's very satisfying to tackle a complicated issue and make someone's day better by assisting them." The Front Office staff members all enjoy the social nature of the job and get a kick out of meeting and interacting with different people all the time.

"It can be challenging to deal with people rushing into the Front Office in a panic, when they have urgent work to complete and don't know what is wrong with their equipment. We are under a lot of pressure to aid them as quickly as possible," notes Vosloo. "Not being able to help someone, no matter what you try, is frustrating. Some days the office is jam-packed from 10am to 3pm, which can be pretty exhausting."

What are the toughest requests you've had to deal with?

There have been requests to repair broken hardware, like cracked screens or completely broken devices that are in terrible shape, which is unfortunately not a service that we offer. The team has even had requests to get wireless connections to work when there aren't even wireless capabilities on the device. They say that the tough problems usually come when people have older devices, hardware or operating systems. "Even after exhaustive research, it is sometimes impossible to fix the problem, and the tough moment is when you have to turn someone away because you were not able to fix their issue," observes Vosloo.

What are the funniest queries you get?

"People sometimes come in here in a panic, with serious looks on their faces and they say they have tried everything and nothing works," says Vosloo. "When we have a look at their computers, all that's wrong is that their wireless was turned off or num-lock was off or something equally small was wrong, and we soon have them laughing about it. It is always very satisfying to see them leave happy."