UCT gets the nod as 3rd most beautiful university 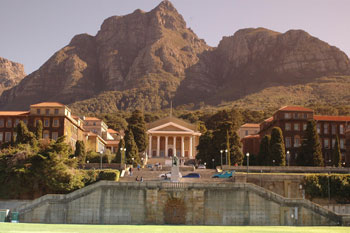 Picture perfect: It was UCT's mountain setting that clinched it the 3rd spot on The Telegraph's list of most beautiful universities

British newspaper The Telegraph chose UCT as the third most beautiful university in the world. Oxford University was first followed by Harvard.

In the photo gallery showcasing the 16 most beautiful universities on the newspaper's website, the university's "mountain setting" is praise above its architecture.

UCT is the only African university to make it onto the list, which includes one of the oldest universities - in Bologna, Italy - in the world. The photo gallery is dominated by European universities.

In what some might consider a slightly ironic twist UCT, which in the apartheid era was known as "Moscow on the Hill", is one place ahead of the actual Moscow State University. The university, which is the oldest South African tertiary institution and an African leader in teaching and research, moved to the grounds it currently occupies in 1928, where it celebrated its centenary. The land was donated by Cecil John Rhodes and used to be part of his Groote Schuur estate.

View the gallery of the 16 most beautiful universities.