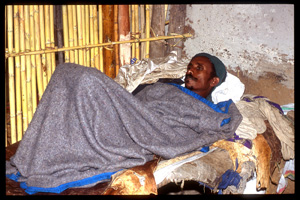 (Image courtesy of the CDC.)

Travellers to tropical and subtropical regions can attest to the stringent immunisation they have to undergo in preparation for an assault from the real-life vampires that kill more people each year than sharks, hippos and car accidents combined.

But it only takes one bite from a hungry female mosquito of the Anopheles genus to infect human beings with the parasite plasmodium that causes malaria.

Out of hundreds of recognised species of the nocturnal Anopheles mosquitoes, between 20 and 40 are known human-malaria vectors. The mosquitoes pick up plasmodium from human bite-victims and transmit them, along with the mosquito's saliva, to the next victim.

In Africa, the A.gambiae sub-species is the dominant vector, while A.freeborni and A.stephensi stand out among other important global carriers.

Mosquitoes typically choose the 'blood donor' according to a rubric that includes odour, movement and body temperature.

Besides human malaria, the Anopheles mosquitoes transmit various other diseases such as filariasis during their weeks-long life cycle.

Insecticide-treated bed nets can save many of the lives lost to the disease, believe groups like the Centres for Disease Control and Prevention (CDC), and many organisations and charities attempt to provide such nets.