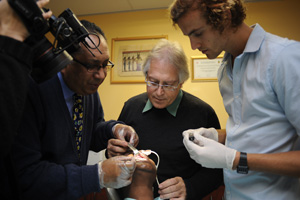 Dr George Vicatos, of UCT's Department of Mechanical Engineering, first made headlines a couple of years ago with his design for titanium prostheses, used by doctors at Groote Schuur Hospital to replace missing - typically surgically removed - bones. His prostheses would be destined for tumour and trauma patients, as well as to replace failing or aging limbs.

Last year Vicatos was making some more medical history when he developed a device that coaxes bone tissue to grow along a curve. His groundbreaking work, completed with his master's student, James Boonzaier, allows oral surgeons to rebuild patients' missing or cleft palates.

As a result, the team, consisting of Vicatos, Boonzaaier and Dr Rushdi Hendricks, a maxillo-facial oral surgeon, was named as South Africa's Inventor of the Year by the sci-tech magazine Popular Mechanics.

Instead of using traditional methods to treat cleft palates, Hendricks chose a technique in which the bones on either side of the cleft are carefully pulled towards each other, ensuring that new bone tissue would grow and eventually cover the cleft. Vicatos' device ensures that the curve necessary for the palate would be obtained.