Plenty on the table at internationalisation conference 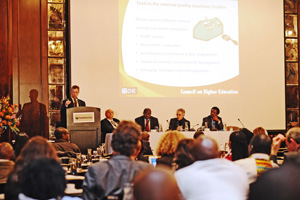 If there is something that keeps him tossing and turning at night, it's that UCT is not keeping apace with the changing landscape that is internationalisation in higher education.

So confessed Vice-Chancellor Dr Max Price at the opening of the 16th Annual International Education Association of South Africa (IEASA) Conference, which started in Cape Town this morning.

"I have to say that the one thing that keeps me awake is the concern, as a leader in an institution of higher education, that we are not really keeping up with the developments in internationalisation," Price told the meeting, "that we may be doing our institutions a disservice in the long term by not really understanding the way that the game is changing, the way that the higher education game is changing as a result of internationalisation, and that we will wake up five years later and discover that we've missed the train, that the train has left the station."

There's an array of issues to consider on this front, Price added. Like the attributes of university graduates, many who will eventually work in other countries. Or the concern over the many international students, from Africa and beyond, who will want to come study at UCT, and the demands that this influx puts on the university's infrastructure. And what of the question of who can and cannot afford to benefit from international exchange agreements? Then there's the thinking that must go into international research collaborations, and about joining, or not joining, any of the plethora of international networks.

In addition, there are international ranking systems - flawed though they may be - that cannot be ignored because of the influence they wield over prospective students, scholars and funders. And now universities must also to come to terms with the growing number of satellite campuses set up "in our own backyard" by international universities, eating into any previous geographical advantage local universities may have held; and should South African universities consider setting up their own satellite campuses elsewhere, Price asked? And - ugly topic though it may be, he noted - turning a profit from internationalisation is another topic that deserves more discussion.

"I think there is a huge agenda here that we're only starting to grapple with," said Price.

The conference would definitely tackle these and other issues, promised IEASA president, Merle Hodges. It will also be significant for a number of other reasons, she noted.

This would include, on the first day, a leadership symposium of university leaders, chaired by Price, at which the role of university leadership in internationalisation was discussed. The conference would also mark the launch of a special interest group on internationalisation in the curriculum, and the signing of a historical memorandum of understanding between IEASA and the African Network for International of Education (ANIE).

The gathering also pulled off a coup in hosting the international launch of the The SAGE Handbook of International Higher Education, which one of the editors, Dr Darla Deardorff of Duke University in the US, presented to Price and others. This handbook, explained Deardorff, holds contributions from international experts from around the world, including Africa and, more specifically, South Africa. The 2012 edition of Study South Africa: The guide to South African higher education, the "definitive" guide to the topic, according to Dr Nico Jooste, chair of the IEASA publications committee, was also unveiled; suitably the theme for this year's volume isPartnerships and Global Scholarship.

One of the highlights of a highlight-filled opening day was a research indaba, facilitated by Professor Danie Visser, UCT deputy vice-chancellor responsible for research.

The state is also keeping an eye on the debates around internationalisation in higher education, observed Mahlubi Mabizela, chief director for university policy and development in the Department of Higher Education and Training (DHET). Agreements with international universities, for example, should keep national foreign policy in mind.

That policy, for one, favours universities and students from countries that form part of the Southern African Development Community, or SADC. The DHET also sets out to improve the country's historically disadvantaged universities through international agreements, said Mabizela. It also plans to put in place the framework and policy that will guide institutions in the country, he added.

"We aim to provide clear guidelines in order to ensure that internationalisation of higher education does not happen at the expense of our sector and the goals that we have set for ourselves."

These are the topics that delegates - some 300 had registered for the conference - and speakers will scrutinise in some detail over the next few days. Contributing to the discussions will be the likes of Professor Ernest Aryeetey, vice-chancellor of the University of Ghana; former UCT deputy vice-chancellor Dr Jo Beall, now director of education and society at the British Council; Professor Chacha Nyaigotti Chacha, chairperson of ANIE; Professor Hans de Wit, professor of internationalisation of higher education at the Amsterdam University of Applied Sciences in The Netherlands; and Professor John Hearn, CEO of the Worldwide Universities Network.

The conference is taking place in the Southern Sun Cape Sun hotel from 29 August to 1 September. For more information go to the IEASA conference website.