UCT mourns the loss of scholar and activist Neville Alexander 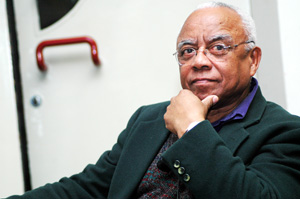 "The university's relationship and association with Dr Alexander extends over many decades," said Vice-Chancellor Dr Max Price in a message to the UCT community. "His incredible impact on the UCT community but also on society as a whole is a profound legacy. Our deepest condolences have been extended to his family, especially his life-long partner, Karen Press, his sisters, Myrtle and Janet, and his brother, Fred."

Alexander, a renowned anti-apartheid activist, was imprisoned on Robben Island from 1964 to 1974.

He worked as the Western Cape director of the South African Committee for Higher Education (SACHED) for six years from 1980, which led to the establishment of a leading alternative higher education initiative called Khanya College. He subsequently established the National Language Project (NLP) and the Project for the Study of Alternative Education in South Africa (PRAESA) in 1992.

SACHED provided Professor Alexander with the opportunity for exploring the concept of alternative education. (He was a part-time lecturer in sociology and educational method and adult education at UCT between 1979 and 1990.)

When the student uprisings were at their height in the 1970s and the 1980s, they turned to initiatives such as SACHED for guidance in developing new approaches to education. Through the NLP and PRAESA, Alexander led the national debate around language policy and planning in South Africa. He came to play a leading role in language policy development with various government departments, including his service as the chair of the new government's Language Plan Task Group.

His most recent work focused on the tension between multilingualism and the hegemony of English in the public sphere.

Alexander's intellectual output is marked by a series of influential books and articles.

Among the most seminal are One Azania, One Nation, written under the pseudonym No Sizwe, which presents a view of the distribution of power and privilege in terms of class, caste, and colour.

Sow the Wind, written in 1986, was influential in the analysis and politics around the uprising in the country. An Ordinary Country, published in 2002, sought to reflect on the politics of South Africa's transition to democracy.

"His books, articles and position papers on language and education, as well as on race and the post-apartheid state, have been a major influence on a new generation of scholars and activists. In particular, he played a leading role in developing and shaping an agenda of multilingualism, which advocated the centrality of language for education and nation building. His vision and acuity will be greatly missed."