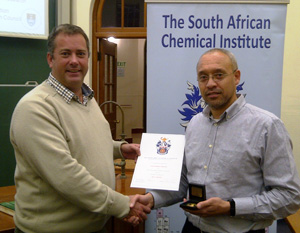 UCT's Dr Gregory Smith celebrated his recent win of the Raikes Medal of the South African Chemical Institute (SACI), with a public lecture at the University of Stellenbosch.

The lecture allowed Smith, recipient of the Distinguished Teacher Award in 2011, to explain his work in organometallic chemistry, where carbon and metal compounds meet and bond. Research into the field of metal-containing macromolecules - his area of interest - has increased in recent years due to the interest in the search for new materials that exhibit useful chemical, electronic, catalytic and medicinal properties, he explained.

Such metal-containing macromolecules offer the possibility of "co-operative physical and chemical properties" arising from interactions among the metal centres, interactions lacking, for example, in the bonding of monomeric compounds, say carbon with carbon.

The potential in the discipline has inspired Smith to pursue the development of functional polymers (compounds with optic and electronic properties) and dendrimers (a molecule of much interest in drug design) with applications in catalysis and medicine, such as anticancer and antimalarial drugs.

The Raikes Medal is awarded to a person, under the age of 40, whose original chemical research shows outstanding promise, as judged by the person's publications in reputable journals.