The best: and that's no longer up for debate 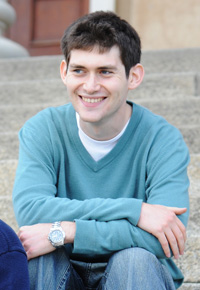 Talk of the town: Daniel Kaliski was named the Best Public Speaker at the recent universities debating championship.

With him having been anointed the Best Public Speaker, aka best debater, at the 17th annual National Universities Debating Championship in July, chances are you will come off second-best.

Kaliski, chairperson of UCT's Debating Union, led by example as the Ikeys clashed words with some 26 other university teams at the competition, hosted by the University of Limpopo. Contestants deliberated on an array of issues concerning Africa's well-being through the lens of the theme Exploring New Frontiers, including the limits of freedom of expression, whether governments should actively discourage consumerist lifestyles and, for the Grand Final, whether art glorifying dictators ought to be destroyed in post-conflict societies.

Kaliski's accolade wasn't UCT's only one, the team also receiving the title of Best Speaking Institution, made to the institution that brought the debaters of the highest quality to the tournament.