Waste to power - it's a gas 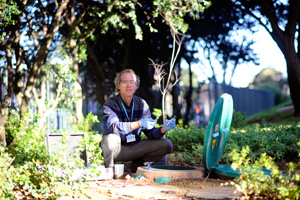 A UCT team has been awarded a R2.5m grant by the NRF for SA biogas projects in which they will test alternative energy systems in urban and rural settings

As has been shown by a UCT project to convert organic waste into an alternative energy source; a project that has received a R2.5-million grant from the National Research Foundation (NRF) to support research into the emerging biogas innovation sector in South Africa.

As part of this project, the UCT team, led by Associate Professor Harro von Blottnitz of the Department of Chemical Engineering, will be supporting biogas demonstration projects, in urban settings in Cape Town and in rural settings. The work will be conducted in collaboration with the Department of Physics at the University of Venda, which has already developed some expertise in biogas technology in rural settings.

The first two of these demonstration activities are small-scale biodigesters operating solely on food waste. These are already operational at UCT's Leo Marquard Hall residence and at a community food garden in Khayelitsha. Two more facilities are expected to be installed over the next 12 months: one by the University of Venda and one in an informal setting in Cape Town.

A biodigester, or anaerobic digester, generates methane gas (a versatile fuel) when organic waste products - say the leftovers from a meal, as at Leo Marquard - are added to a sealed, water-filled chamber containing certain anaerobic bacteria (so called because they live without atmospheric oxygen). These bacteria then ingest the organic waste and release methane as a byproduct.

The methane is captured and diverted to a traditional gas hob, where it is used for cooking.

Another byproduct of this process is liquid slurry that contains high volumes of nutrients suitable for fertilising crops, as is happening in a project run by the UCT student chapter of Engineers without Borders (EwB) in Khayelitsha Read More ....

Earlier this year members of EwB designed and donated a biodigester to the Siyazama Community Allotment Garden Association (SCAGA), the first large-scale community garden in Khayelitsha. The methane runs a gas cooker in the SCAGA kitchen, while the fertiliser is used in the gardens.

EwB's volunteering work is backed up by PhD student Rethabile Melamu, one of the authors of the proposal to the NRF, titled Towards a Technology Specific Innovation System for Harnessing Waste-Based Bio-energy.

The award was granted through the NRF's Global Change, Society and Sustainability Research Programme, which addresses the challenges of "science and technology for global change", with a focus on climate change.

"Africa is still waiting for its green revolution," Melamu and Von Blottnitz noted in their proposal. "Previous studies have established that bio-energy from waste materials is cheaper and greener. In Africa, lots of organic waste is either not treated at all, or under-utilised."

For their inspiration, the authors turned to the German biogas industry and the widespread use of biogas installations in Asia. They aim to develop an understanding of these success stories to help step up implementation of bio-energy projects in South Africa.